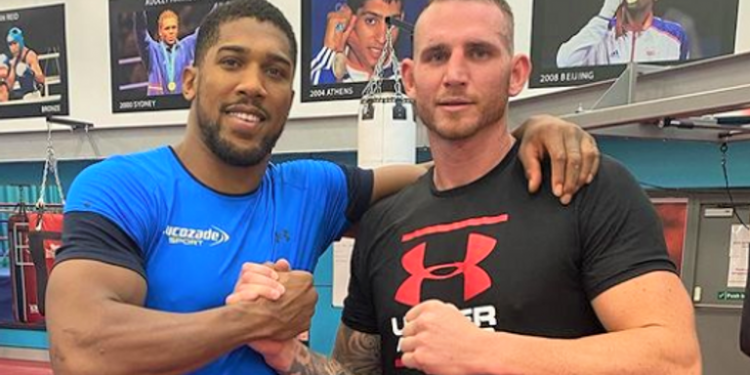 Anthony Joshua has drafted in Australia’s world-rated heavyweight Demsey McKean for “explosive” sparring ahead of his fight against Oleksandr Usyk.

Joshua is preparing to defend his WBA, IBF and WBO titles against Usyk at Tottenham Hotspur Stadium on September 25, live on Sky Sports Box Office.

The unbeaten McKean, who fights in the same southpaw stance as Usyk, has told Sky Sports how he is helping Joshua prepare for the razor-sharp skills of the Ukrainian challenger.

When were you offered sparring with Anthony Joshua?

We first got offered to come over and join AJ’s sparring camp – probably about a month ago.

Restrictions and the timing wasn’t great in Australia, especially for my coach. He was aiming to come over, but there was no guarantee of getting back into the country. That’s how strict it is.

You’ve since relocated your career in Britain?

We pretty much made the decision a couple of weeks ago. Let’s get it sorted, let’s base ourselves over in the UK.

There’s nothing happening in Australia. I’ve literally had two fights in almost two years. I’m unable to defend my titles. I can’t get any worthy opponents in Australia to defend the titles against.

No-one is even allowed into the country to fight. I made the decision to pretty much head overseas and base myself over in the UK where the sparring is plentiful.

I’m up in Sheffield for the next two weeks, joining AJ’s training camp.

Done some training yesterday afternoon. He was there, met him, had a bit of a chat. A lovely bloke. We’ve got our first spar today. I’m looking forward to that. It’s going to be a good experience.

He’s the biggest name in boxing in the world at the moment, in all weight classes, let alone heavyweight. To be in there and to gauge myself against the No 1 guy in the heavyweight division, that’s massive for me.

A really good experience. It was good to be training alongside him and it’s going to be even better to trade some punches with him very shortly.

What are your strengths as a heavyweight contender?

I consider myself a technical fighter. I like to be nice and sharp. I’m quite fast and explosive for a heavyweight. Those are definitely my strengths. I like to showcase my speed.

When will you make your UK debut?

We’re in talks for a fight before the end of the year. I think we’re possibly looking at December some time.

Do you want to fight a British rival in the near future?

Being world-rated, I’d be happy to fight any one of the top 15 guys as well.

There are a couple of big names that are taking shape, but I don’t think right away. I think they want to get my name out there, get a bit of exposure up and get a couple of big fights lined up.

Can you give us a hint?

One is from New Zealand and one is from the UK, I’ll just say that.

I think that’s what everyone wants to see [a Joseph Parker fight]. A trans-Tasman battle isn’t it.

We were in talks a while ago about a potential fight. Due to Covid – obviously he’s training in New Zealand – we were kind of restricted from the rest of the world.

That one looked like it was starting to take shape a bit, but I think they just need to get my name out there, get some exposure a little bit more.

You were linked with an IBF final eliminator against Filip Hrgovic?

So that was in talks as well to take that potential fight, but obviously with the restrictions and with my coaches coming abroad, it made it very hard to be able to get back into the country, especially with my coach, who has other world-rated fighters, has a family, has a business to run as well.

Opportunities arise. Once you’re in the top 15, you can get a world title shot call-up at any time.

Who knows? Now I’m in the UK, if Usyk decides to break a leg or something, then I get slung into the Anthony Joshua fight, because I’m a southpaw and I’m the top 15 in the world. He’s been prepping for a southpaw. That’s another opportunity that could arise in that sense.

Injuries happen, things happen, illnesses happen, some people get a late call-up. You’ve got to kind of stay ready and be ready, and be in a position to take those fights. Anything can happen.

Can you become Australia’s next world champion?

I’m definitely the man to do it. The only world-rated heavyweight in Australia at the moment, 19-0, No 11 with the WBO and IBF.

Another fight, we’ll be in the top 10 for sure and then there’s going to be some big names on the list.