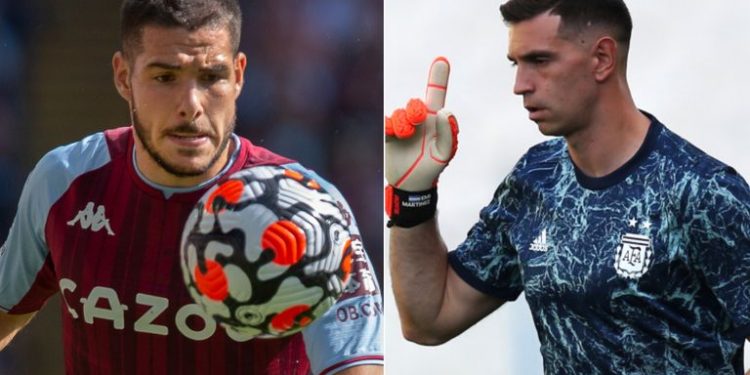 Tottenham duo Giovani Lo Celso and Cristian Romero are set to be fined by the club after joining up with the Argentina national squad without permission.

Sky Sports News has learned that Lo Celso and Romero will be disciplined for making the trip to South America for games against Venezuela and Brazil against the club’s wishes, with both players expected to receive hefty fines.

Lo Celso and Romero are planning on flying to Croatia, along with Aston Villa’s Emiliano Martinez and Emiliano Buendia, following the controversial suspension of Argentina’s World Cup qualifier in Brazil to avoid having to quarantine. The four Argentine Premier League-based players were accused of not following strict Covid protocols upon entering Brazil.

Crucially, Buendia and Martinez have both followed the agreement set out with Villa before they left for the international break, and there is no suggestion they have done anything wrong, but the same cannot be said for the Tottenham duo.

The four players will miss Argentina’s third game against Bolivia in the early hours of Friday morning UK time.

Sky Sports News has been told Martinez and Buendia will fly to Croatia along with Lo Celso and Romero, rather than the UK, so they can continue training before returning to England for their club.

A trip straight back to the UK from South America would have meant 10 days in government hotel quarantine but stopping off for that period in a green list country means they can train and then travel back to the UK without quarantine.

If it goes as the players wish, each of them will only miss one Premier League match before being available for selection again.

That would mean Martinez and Buendia would miss Villa’s trip to Stamford Bridge to face Chelsea, while Lo Celso and Romero would both miss Spurs’ visit to Crystal Palace.

It is understood that the flight and accommodation to Croatia is being organised by the players and their representatives directly, rather than with the involvement of their clubs.

Tottenham are in a difficult position because Romero only joined the club a month ago for a fee of £42m from Atalanta.

While it’s thought Spurs officials do not want to damage the new relationship, they nevertheless feel they need to enforce a strong message concerning discipline.

There are further international matches involving Argentina in October and November, and Villa and Spurs are both determined to avoid such difficulties on those occasions.

FIFA have confirmed they will analyse match reports after Brazilian health officials entered the pitch in a row over Covid rules, resulting in the suspension of the World Cup qualifier.

Under Brazilian rules, visitors who have been in the UK in the 14 days before entering the country must quarantine for 14 days on arrival.

Although Anvisa did not name the four, the players with Premier League clubs are Buendia and Martinez, as well as Giovani Lo Celso and Cristian Romero of Tottenham.

Martinez, Lo Celso and Romero were named in Argentina’s starting line-up, while Buendia did not make the squad.

The officials marched onto the field shortly after kick-off and confronted the Argentina players, who left the field while the two managers – along with Argentina captain Lionel Messi and Brazil’s players – gathered to discuss the stoppage.

The South American football confederation CONMEBOL later confirmed the game – which was 0-0 when it was stopped – had been called off by the referee.

A FIFA spokesperson said: “FIFA regrets the scenes preceding the suspension of the match between Brazil and Argentina for the CONMEBOL qualifiers of the FIFA World Cup 2022 which prevented millions of fans from enjoying a match between two of the most important football nations in the world.

“The first match official reports have been sent to FIFA. This information will be analysed by the competent disciplinary bodies and a decision will be taken in due course.”

What were the Covid protocols and were they broken?

Anvisa had sought the immediate isolation of the four players just hours before the game in Sao Paulo.

“Anvisa considers the situation a serious health risk and so has asked local health authorities to determine the immediate quarantine of the players, who are stopped from participating in any activity and should be prevented from remaining on Brazilian soil,” Anvisa said in a statement ahead of kick-off.

The Argentine squad flew into Brazil on Friday, the day after beating Venezuela 3-1 in a World Cup Qualifier in Caracas.

Anvisa were tipped off the four players did not state they had been in the UK within the last two weeks on their immigration forms. The health regulator confirmed the details the players gave were “false”.

The Argentine Football Association (AFA) expressed its “deep discomfort” at the suspension of the match.

It said the team had been in Brazil since September 3 and had complied with all the health protocols.

“Football should not experience these kinds of episodes that undermine the sportsmanship of such an important competition,” the AFA said in a statement.

The Brazilian Football Confederation (CBF) said it “deeply regrets” the events that ended up causing the suspension and insisted Anvisa “could have exercised its activity in a much more appropriate manner in the various moments and days prior to the match”.

It added: “The CBF also emphasizes that at no time, through the interim president, Ednaldo Rodrigues, or its directors, interfered in any point related to the sanitary protocol established by the Brazilian authorities for the entry of people into the country.

“The role of the CBF was always in an attempt to promote understanding between the entities involved so that the sanitary protocols could be fulfilled satisfactorily and the game could be played.”