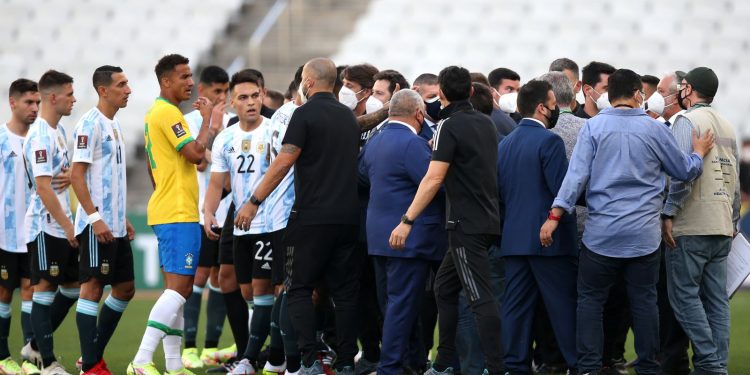 The World Cup Qualifier between Brazil and Argentina on Sunday night was abandoned after Brazilian health officials entered the pitch in a row over Covid rules.

The officials marched onto the field shortly after kick-off and confronted the Argentina players, who left the field while the two managers – along with Argentina captain Lionel Messi and Brazil’s players – gathered to discuss the stoppage.

The South American football confederation CONMEBOL later confirmed the game – which was 0-0 when it was stopped – had been called off by the referee, who they said would submit a disciplinary report to FIFA.

Anvisa had sought the immediate isolation of the four players just hours before the game in Sao Paulo.

Under Brazilian rules, visitors who have been in the UK in the 14 days before entering the country must quarantine for 14 days on arrival.

Although Anvisa did not name the four, the players with Premier League clubs are Emiliano Buendia and Emiliano Martinez of Aston Villa and Giovani Lo Celso and Cristian Romero of Tottenham.

Martinez, Lo Celso and Romero were named in Argentina’s starting line-up, while Buendia did not make the squad.

“Anvisa considers the situation a serious health risk and so has asked local health authorities to determine the immediate quarantine of the players, who are stopped from participating in any activity and should be prevented from remaining on Brazilian soil,” Anvisa said in a statement ahead of kick-off.

The Argentine squad flew into Brazil on Friday, the day after beating Venezuela 3-1 in a World Cup Qualifier in Caracas.

Anvisa were tipped off that the four players did not state they had been in the UK within the last two weeks on their immigration forms. The health regulator confirmed the details the players gave were “false”.

Argentina manager Lionel Scaloni insisted his side were not informed they could not take the field, telling reporters after the game: “I’ve come here so that our country can find out what’s happened. It makes me very sad.

“I’m not looking to find any guilty parties. Whether something happened or not, it wasn’t the right time for that intervention.

“It should’ve been a footballing spectacle for everyone to enjoy the best players in the world. I’d like the Argentine people to understand that as the national team coach, I have to defend my players.

“At no point were we notified that they couldn’t play. We wanted to play the game, as did the Brazil players.”

Argentine FA president Claudio Tapia added his players had not lied about being in the UK before entering Brazil, saying: “There can’t be any talk of lies here because there is health legislation under which all South American competitions are played.

“Health authorities in every country approved a protocol that we have been fully compliant with.

“What’s happened today is terrible for football and sends out a very bad image. Four people interrupted the game to inform us of something and CONMEBOL asked the players to go to the dressing room.”

The abandonment comes amid continuing anger in South America at rules which have prevented several teams from using key players for this month’s three World Cup qualifiers.

Brazil were without nine key men for the Argentina game, and other South American sides have also lost players due to a decision by some European clubs not to let their players travel to the continent.

They would have to quarantine on return and the clubs do not want to lose their players for subsequent league games.

Aston Villa said Martinez and Buendia had agreed to return to the club after the Brazil game and miss Argentina’s match against Bolivia on Tuesday. The Argentine Football Association, however, said they would play all three games.