Bulker runs aground in Suez Canal but traffic remains uninterrupted 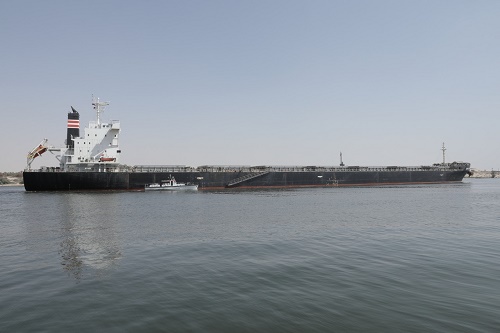 Bulker runs aground in Suez Canal but traffic remains uninterrupted

After the incident occurred, the canal authority informed that it “has handled the very brief grounding incident of the bulk carrier CORAL CRYSTAL, which transited among the North convoy at the 54 km mark (Canal marking) in the western branch of Al- Ballah bypass with 43 thousand tons of cargo on board.”

The incident was resolved with the help of SCA tug boats, and the ship resumed its transit through the canal.

Traffic was not negatively impacted in any way since it was directed to the eastern branch of Al- Ballah bypass, according to the SCA.

The day the incident happened, 61 vessels transited in both directions with a net tonnage of 3.2 million tons.

Read This: CBN to infuse more dollars through banks to improve forex supply

Furthermore, the authority called upon “all media outlets to investigate what is being published accurately, not to pay attention to news of unknown source and to rely on official information and news issued by the authority.”

The bulk carrier Coral Crystal, built in 2012, measures 225 meters in length and 32 meters in width. It is owned by Japanese shipping company Okino Kaiun.

The Panama-flagged vessel is reportedly loaded with 401 tonnes of cargo having departed Constanta, Romania on 2 September.

The incident came less than six months after the giant containership Ever Given ran aground in Suez Canal causing global shipping traffic jam.

The ship resumed its voyage to the Port of Rotterdam after receiving the official approval to depart the canal from the Suez Canal Authority (SCA).