Can anyone stop Chelsea in the Women’s Super League? 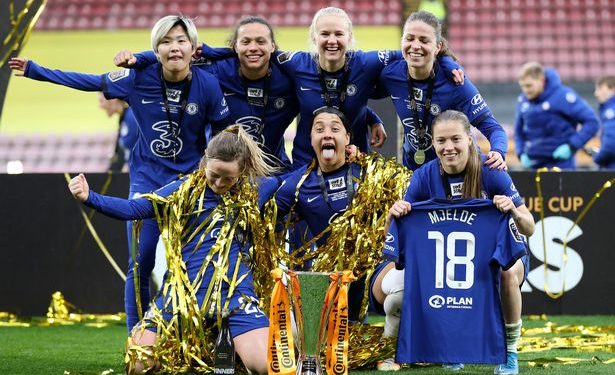 Can anyone stop Chelsea in the Women’s Super League?

Lifting the WSL trophy aloft on May 9, Chelsea finally had their moment of redemption. Through no fault of their own, the 2019/20 season had been curtailed by Covid-19 and on a points-per-game basis, handed Chelsea the title over Manchester City, who had been top of the table when lockdown began.

“To win the league outright silences anyone from the points-per-game from last season,” Chelsea boss Hayes said at the time.

“This is the best squad and the best title in my time here, because of the threats and the opposition. I always felt we were leading the league, and that shows our dominance this year.

“I always think about winning the league, that is the bread and butter. It shows you are consistent as champions. To be in a position to win the quadruple, I am lucky to have these players.”

And it was an astonishing domestic season from Chelsea. They lost just once to Brighton in the WSL, drawing three further games. The other 18 games were all victories with only four goals conceded. They simply bulldozed most of the opponents put in their path.

Last season also saw Chelsea beat Man City in the Community Shield and thrash Bristol City 6-0 in the League Cup final. The 2020/21 FA Cup campaign will spill over into this season, where Birmingham await in the quarter-finals – Chelsea remain on the cusp of an astounding domestic quadruple.

Chelsea have had a relatively quiet transfer window by all accounts, but one arrival that grabbed the headlines was forward Lauren James, sister of Chelsea men’s defender Reece James.

She had spent her early youth career in the Blues academy, before representing Arsenal and Man Utd in the Women’s Super League. She scored 14 goals in 18 league appearances to help United win promotion to the WSL in the 2018/19 season, before netting eight goals in 22 league appearances in the following campaigns.

“Lauren is an exciting, young talent who we have admired for a while. When the opportunity came up to sign her, we felt now was the right time to bring her back to the club. We’re excited to see how she develops in the coming years and look forward to welcoming her to pre-season training.”

There have also been additions in defence, with Aniek Nouwen arriving from PSV, but perhaps two of the most important pen-to-paper moments have come with people already at the club.

Chelsea have locked in one of the most talented female managers in the game, with Hayes signing a new long-term deal in July, taking her into her 10th season in charge. Goalkeeper Ann-Katrin Berger also agreed a new three-year deal after clinching the WSL Golden Glove, with 12 clean sheets in 17 appearances.

How will the Champions League affect Chelsea?

Another highlight of Chelsea’s season was reaching the Champions League final – the first British side to do so since Arsenal in 2007. However, they faced a devastating Barcelona side who swept them aside in the first half and Chelsea were unable to recover.

They have already bounced back since then – beating Everton in the FA Cup fifth round on May 20 – but will there be a further hangover effect from a painful defeat?

Carney said: “They’ve won it [the WSL] for the last two seasons back-to-back, which is a big task in itself. But sometimes, that is a real tough deal because then everyone wants to beat you and they up their ante by 10 or 20 per cent because they always want to beat the champions.

“You would say Chelsea have the best squad, the most experienced manager, the best individual players, but it’s how they come back from the Olympics and what their motivation is like because they’ve won it. What about the disappointment of the Champions League, how do they go again?

“For Chelsea, I look at it more like where are they going to get the energy or desire to win it again?”

Chelsea have often been dubbed ‘mentality monsters’ and it would be a surprise if they did not end the season with additional silverware in their ever-growing trophy cabinet. But as ever, they will need to pull from every resource to retain the WSL trophy this season.

Source: skysports
Via: norvanreports
Tags: Can anyone stop Chelsea in the Women's Super League?