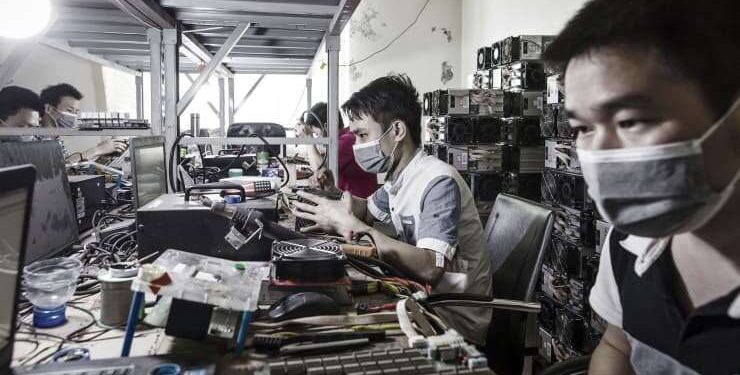 China has long been home to more than half the world’s bitcoin miners, but now, Beijing wants them out ASAP.

In May, the government called for a severe crackdown on bitcoin mining and trading, setting off what’s being dubbed in crypto circles as “the great mining migration.” This exodus is underway now, and it could be a game changer for Texas.

Mining is the energy-intensive process which both creates new coins and maintains a log of all transactions of existing digital tokens.

Despite a lack of reserves that caused dayslong blackouts last winter, Texas often has some of the world’s lowest energy prices, and its share of renewables is growing over time, with 20% of its power coming from wind as of 2019. It has a deregulated power grid that lets customers choose between power providers, and crucially, its political leaders are very pro-crypto – dream conditions for a miner looking for a kind welcome and cheap energy sources.

“You are going to see a dramatic shift over the next few months,” said Brandon Arvanaghi, previously a security engineer at crypto exchange Gemini. “We have governors like Greg Abbott in Texas who are promoting mining. It is going to become a real industry in the United States, which is going to be incredible.”

2021 data for the global distribution of mining power is not yet available, but past estimates have shown that 65% to 75% of the world’s bitcoin mining happened in China – mostly in four Chinese provinces: Xinjiang, Inner Mongolia, Sichuan and Yunnan. Sichuan and Yunnan’s hydropower make them renewable energy meccas, while Xinjiang and Inner Mongolia are home to many of China’s coal plants.

The drawdown in miners has already begun in Inner Mongolia. After failing to meet Beijing’s climate targets, province leaders decided to give bitcoin miners two months to clear out, explicitly blaming its energy misses on crypto mines.

Castle Island Ventures founding partner Nic Carter says that while it’s not totally clear how China will handle next steps, a phased rollout is likely. “It seems like we’re going from policy statement to actual implementation in relatively short order,” he said.

The way this exodus is measured is by looking at hashrate, an industry term used to describe the computing power of all miners in the bitcoin network.

“Given the drop in hashrate, it appears likely that installations are being turned off throughout the country,” continued Carter, who also thinks that probably 50% to 60% of bitcoin’s entire hashrate will ultimately leave China.

Although China’s announcement hasn’t been cemented in policy, that isn’t stopping miners like AlejandroDe La Torre from cutting their losses and making an exit.

“We do not want to face every single year, some sort of new ban coming in China,” said De La Torre, vice president of Hong Kong-headquartered mining pool Poolin. “So we’re trying to diversify our global mining hashrate, and that’s why we are moving to the United States and to Canada.”

One of bitcoin’s greatest features is that it is totally location agnostic. Miners only require an internet connection, unlike other industries that must be relatively close to their end users.

“The cool thing about bitcoin that is underappreciated by a lot of the naysayers is that it’s a portable market; you can bring it right to the source of energy,” said Steve Barbour, founder of Upstream Data, a company that manufactures and supplies portable mining solutions for oil and gas facilities.

That said, the exodus won’t be instantaneous, in part, because it will take miners some time to either move their machines out of China or liquidate their assets and set up shop elsewhere.

Because miners at scale compete in a low-margin industry, where their only variable cost is typically energy, they are incentivized to migrate to the world’s cheapest sources of power.

“Every Western mining host I know has had their phones ringing off the hook,” said Carter. “Chinese miners or miners that were domiciled in China are looking to Central Asia, Eastern Europe, the U.S. and Northern Europe.”

One likely destination is China’s next-door neighbor, Kazakhstan. The country’s coal mines provide a cheap and abundant energy supply. It also helps that Kazakhstan has a more lax attitude about building, which bodes well for miners who need to construct physical installations in a short period of time.

Bekbauov says that he’s stopped counting the number of Chinese miners who have called him to ask about relocation options, ranging from operations with 15 rigs to thousands.

“One miner told us that only government electricity plants have restricted mining and private ones will continue to service miners,” Bekbauov told CNBC.

“But most of the electricity is generated by government power plants, so miners will have to move. That makes them uncertain and desperate to find other locations,” he said.

Whether Kazakhstan is a destination or simply a stopover on a longer migration west remains to be seen.

Arvanaghi is bullish on North America and thinks the hashrate there will grow over the next few months.

“Texas not only has the cheapest electricity in the U.S. but some of the cheapest in the globe,” he said. “It’s also very easy to start up a mining company … if you have $30 million, $40 million, you can be a premier miner in the United States.”

Wyoming has also trended toward being pro-bitcoin and could be another mining destination, according to Arvanaghi.

There are, however, a few major limitations to the U.S. becoming a global mining destination.

For one, the lead time to build the actual physical infrastructure necessary to host miners is likely six to nine months, Carter told CNBC. “The U.S. probably can’t be as nimble as other countries in terms of onshoring these stray miners,” he said.

The move logistics may also prove difficult. There is a shipping container shortage, thanks to the tail winds of the Covid pandemic.

But perhaps the biggest question is the reliability of the Texas power grid. A storm that devastated large swaths of the state in 2021 has reignited a debate over whether Texas should winter-proof its systems, a potentially costly project that might affect taxes or other fees for those looking to tap into the state’s power grid. More recently, ERCOT, the organization that operates Texas’ grid, asked consumers to conserve energy amid what officials called an unusual number of “forced generation outages” and an upcoming heat wave.

Tesla CEO Elon Musk has bashed bitcoin mining, claiming that it is bad for the environment. It’s not a new criticism.

For years, skeptics have maligned the world’s most popular digital token for polluting the planet, while supporters have extolled the virtues of bitcoin and its role in accelerating the rise of renewable energy.

It is unclear whether the China mining exodus will make or break the case for bitcoin enthusiasts in the debate around the token’s carbon footprint. The dominant narrative, to date, has been that much of the world’s bitcoin is mined with Chinese goal.

“From a narrative perspective, it’s definitely an improvement,” said Carter. “But China also has the most abundant stranded hydro resources in the world.”

The country offers significant energy vectors from wind, solar and especially hydropower in the south. Xinjiang’s grid, for example, is 35% powered by wind and solar energy inputs.

If all the miners do end up leaving China, it will mean less fossil fuel-powered mining, but it will also mean that the network’s share of renewable energy-powered mining will drop. This is why the question of where these migrant miners end up could prove critical to bitcoin’s future. “It’s the biggest story of the year for bitcoin,” said Carter.

De La Torre says they’re looking to expand operations using green energy, a trend that is already years in the making. He says that hydro plants are generally cheaper than fossil fuels in most parts of the world.

Each year, investment bank Lazard releases a breakdown of energy costs by source. Its 2020 report shows that many of the most common renewable energy sources are either equal to or less expensive than conventional energy sources like coal and gas. And the cost of renewable power keeps going down.

But there are limitations to running crypto mines purely on renewable energy.

Though solar and wind are now the world’s least expensive energy sources, both power supplies face limitations at scale, so there is concern over the viability of miners turning exclusively to wind or solar energy.

For the time being, there isn’t that much mining capacity worldwide that is ready to absorb the Chinese miner diaspora. While they scramble to find a new home, we could see hashrate go offline – and stay offline.

In practice, that would mean all the remaining miners are more profitable for a period of time.

Having more geographic dispersion would even out the global balance of power, and it would also reduce the ability of any one sovereign nation to co-opt or control the network.

We may also see special crypto economic zones pop up in the next few months.

“You will see jurisdictions adopting a very favorable stance and creating the equivalent of special zones to encourage miners to host locally,” said Carter. “We’re seeing it at the state level here. You’re also going to see it at the country level, you might even see subsidized electricity for mining.”