Covid-19: GUTA worried over closure of major Port in China 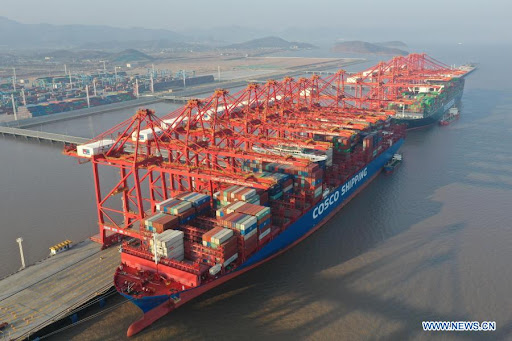 Covid-19: GUTA worried over closure of major Port in China

The closure of one of China’s major Ports due to infection of a worker with the Covid-19 virus, has caused concerns for the Ghana Union of Traders Associations (GUTA).

The closure of a key terminal at the Ningbo-Zhoushan Port which is the third busiest port in the world, GUTA says poses a major concern to the operations of its members as China is a major source of goods imported into the country.

The closure of the Port is likely to put further pressure on already stretched supply networks around the world.

“This is going to put another layer of burden on the stress of doing business especially under the huge effect of COVID-19 which has seen problems with logistics, especially with containers for the shipping lines.”

“So having closed such a major port in China, it means that it’s going to put a lot more pressure on the other ports logistics-wise, in terms of containers, movement of goods from Ningbo to other areas which will also add up to the cost of doing business,” stated President of the Association, Dr Joseph Obeng.

“This definitely is going to lead to increment in costs, then, of course, the ripple effect will get to the final consumer and that is for sure. But as to how negligible or significant it is, depends on the difference in pricing it would bring to bear,” he added.

Related Story: China’s zero-Covid policy is so strict that it shut down a whole shipping terminal after just one case

This is the second time this year that China has suspended operations at one of its key ports.

Analysts say China’s “zero tolerance” approach toward Covid will exacerbate already stressed supply chains this year with some warning that this may not be the last closure at a port as long as Beijing continues to take this stance.

Ningbo-Zhoushan is the third busiest in the world by container volume. In 2019, it handled 27.49 million twenty-foot equivalent units (TEUs) of container throughput, according to the World Shipping Council.