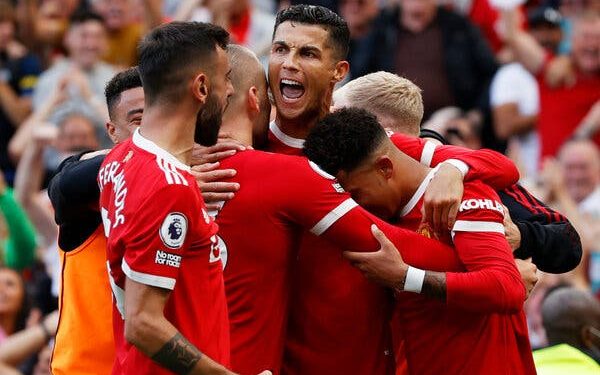 Gary Neville discusses Cristiano Ronaldo instant impact at Manchester United, has likened Thiago’s performance for Liverpool at Leeds as ‘Paul Scholes-like’ and predicted Chelsea will be hard to stop this season.

Speaking on the Gary Neville Podcast following Liverpool’s 3-0 win over Leeds, the Sky Sports pundit also had his say on why this season’s Premier League season could be the greatest in terms of quality and his early thoughts on the title race.

“I walked out into Manchester’s city centre on Saturday morning and I’ve not seen it as alive for five or 10 years. What he’s done to the Premier League for interest is exciting but for the city, he’s absolutely got it buzzing with excitement – and this was even before he scored the two goals.

“I was at Salford and saw the news that he scored. I could only imagine what the atmosphere was like and I spoke to a couple of people who were there and they said it was out of this world, bouncing like they’ve never seen it before. And, Salford scored in the last minute which meant it was the perfect football day.”

“In the first half of the Leeds game, I sat back and was marvelling at the speed, quality and atmosphere. We always tend to look back and say there was more tackling in the 80s and 90s, it was more real, standing on the terraces. But what I’ve seen in the first four weeks of this season, takes some beating in terms of quality. This is as good as I’ve seen. We lauded the players for being brilliant through Covid last season in difficult times and all the fans frustratingly having to watch at home. It was desperate at times with no fans in the stadium. But it’s more than made up for it at the start of this season – it’s a compelling watch. And Ronaldo coming back has put the cherry on top of a very good cake.”

“Everyone is talking about Cristiano Ronaldo and Manchester United, Manchester City being champions and Chelsea signing Romelu Lukaku, so everything has been away from Liverpool with people questioning if this team is over the hill or past their best. But this was a really good performance, they did everything they were asked to do.

“That Liverpool midfield wasn’t perhaps the most athletic or mobile – he could have played Jordan Henderson, James Milner and Naby Keita to match Leeds up. But it was all about composure. It reminded me of the way Paul Scholes played at Anfield. There would be a frantic spell in the game and all of sudden there would be a small guy in the middle of the pitch who would get his foot on it and there would be calm and peace. Michael Carrick could do the same. And Thiago did the same today. Today was an example of what he has been signed to do. When it’s frantic and desperate, put your foot on the ball and play the pass that opens the game. He did that.”

Neville on…Chelsea being difficult to stop

“There is a feeling about Chelsea. They keep clean sheets, their striker is guaranteed to score, there’s a good midfield. They will be very difficult to stop. The talk will be all about Manchester. Pep Guardiola, Ronaldo, but everyone knows Chelsea are serious. I watched them at Anfield and it was a real performance. It’s a brilliant Premier League. I’m looking forward to see what happens in the next few months. We just have to let it develop – everyone will want to try and predict the champions this early. Manchester United, Manchester City, Chelsea but Liverpool are really in it. They really are in it.”