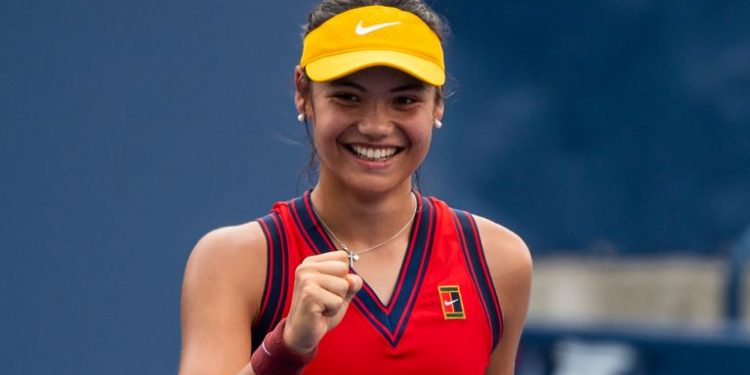 Fearless British teenager Emma Raducanu continued her astonishing run at the US Open by reaching the semi-finals with a stunning 6-3 6-4 victory over Olympic champion Belinda Bencic.

The 18-year-old from Kent, continued her dream run at Flushing Meadows by sending Swiss favourite Bencic packing to become only the third woman to reach the semi-finals of the US Open ranked outside the top 100, joining Kim Clijsters in 2009 and Billie Jean King in 1979.

It is also the first time a qualifier has reached the women’s semi-finals in New York.

After the match, Raducanu said: “Of course, playing Belinda, she is such a great opponent and is in great form, she hits the ball so hard, I had to adjust and adapt and it was a really tough match. I am so happy to come through and thank you so much for all your support today.

“I have an absolutely amazing team and I have a team back home who could not be here – I am sure they are watching, I hope!

“Thank you so much everyone, I wish you could be here with me but everything we have been working for has shown here.

“It was 0-30 in my last couple of service games so to hold was pretty big, it was one point at a time and trying to focus on what I can control – Belinda was going to fight to the end but I am really pleased to come through that.

“To have so many young players here doing so well shows how strong the next generation is – everyone is on their trajectory, so I am just here doing what I can control and it is my own journey.”

Read This: Experts call for greater inclusion of blockchain technology in policy making

Raducanu, ranked 361st in the world when she burst on to the scene at Wimbledon earlier this summer, headed into her maiden Grand Slam quarter-final having dropped only 15 games in four main-draw matches. But Bencic, the 11th seed and world No 12, was by some distance the highest-ranked player she had ever faced.

The Swiss, who had won 13 of her 14 previous matches, made a strong start by breaking a tentative Raducanu in her opening service game before consolidating with a comfortable hold as the Brit struggled to find her feet inside Arthur Ashe Stadium.

Bencic was a prodigious junior talent and made the last eight at the US Open for the first time aged 17, but now at 24, she is potentially hitting her peak having already claimed singles gold in Tokyo earlier this summer.

She reached the quarter-finals without dropping a set with her victims including seeded duo Jessica Pegula and Iga Swiatek.

Raducanu struggled to find her rhythm, but the qualifier began to feel more comfortable and stayed in contention. She successfully grabbed a second break point opportunity to level things up and revelled in the atmosphere to fight her way back from 0-30 to hold for 4-3.

Bencic knew she was involved in a contest and was clearly feeling the heat with Raducanu finding depth and angles to earn another break point chance following a stunning 20-shot rally. And she took it with aplomb, before serving out the set in style – her 15th consecutive set won in New York from qualifying to the last eight.

Bencic took a different approach at the start of the second set by upping her service speed, before Raducanu saved three break points to hold for 1-1.

The brilliant young Brit continued her cool decision-making by sealing a break for a 3-2 lead before holding to move one step closer to her maiden Grand Slam semi-final.

Bencic looked despondent down the other end of the court and just about held on to her serve in the seventh game to stay alive. Both players then held which meant Raducanu walked out to serve for a place in history.

The teenager stayed calm, just like she has done all the way through the tournament, to become the first qualifier to reach the US Open semi-finals where she will face either fourth seed Karolina Pliskova or Greece’s Maria Sakkari.