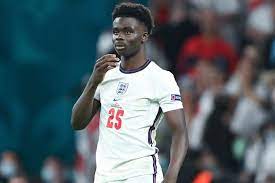 Birthday boy Bukayo Saka put his Euro 2020 final penalty miss behind him by scoring on his return to Wembley with England as Gareth Southgate’s side won 4-0 against Andorra to maintain their 100 per cent start to World Cup qualifying.

Fifty-six days on from that shoot-out defeat to Italy, Saka leaped at the back post to head in England’s final goal of a Sunday evening stroll past the world’s 156th ranked side, to mark his 20th birthday in style.

The Arsenal forward had received racist abuse in the wake of his saved spot-kick in the summer but got the loudest cheer when the teams were read out and earned a measure of redemption by capping his comeback performance for his country with a goal.

Jesse Lingard finished with a double but the floodgates didn’t open up initially after his 18th-minute strike, with Andorra preventing their hosts – who had made 11 changes from Thursday’s win over Hungary – from having another shot on target in the first half.

Reece James, after swapping right-back for a central midfield with Trent Alexander-Arnold at half-time, rattled the bar with a thunderbolt soon after the restart but it took an A-list triple substitution on the hour mark to kick start the goal rush England’s dominance deserved.

Jack Grealish fed Mason Mount to win a penalty which was hammered in by Harry Kane (72) – moving him level with Michael Owen on 40 goals for his country – before Lingard added a too-easy second for himself (78) and Saka drew delighted celebrations in the stands and among his team-mates (85).

After the intensity and abuse England’s players experienced away in Budapest on Thursday night, this cruise in the September sunshine was more a celebration of the team’s achievement’s at Euro 2020, with Gareth Southgate receiving a warm ovation from a family-filled Wembley Stadium before the warm-ups.

The task will be much tricker on Wednesday, when England go away to Poland but, with five wins from five under their belt and a commanding lead at the top of Group I, they’ll know victory in Warsaw will all but secure their place at the World Cup in Qatar.

How England put four past Andorra…

With the Wembley crowd in enthusiastic mood there was an expectation on England, despite the wholesale changes, to put on a display and Jude Bellingham drew roars of approval just a few minutes in when he scooped the ball stylishly through the legs of Ludovic Clemente by the touchline. But Andorra, in their 4-5-1 were able to keep their hosts at bay early on.

That changed from 17 minutes in, though, with only a desperate, glancing block from Chus Rubio keeping out Saka’s goal-bound shot, before Lingard eventually broke the deadlock a minute later, with the Manchester United man steering in from eight yards after controlling a rebound in the box, following good work from Tyrone Mings and Bellingham in the build-up.

Lingard thought he’d bagged two in two minutes when he looped an exquisite chip over Andorra goalkeeper Josep Gomes before an offside flag curtailed his celebrations, and while Marc Vales earned the visitors some sarcastic cheers by trying his luck from near the halfway line, the home side were completely on top, with Saka almost picking out debutant Patrick Bamford – who was also celebrating a birthday – with a lofted through ball to the back post.

Bamford turned provider soon after, heading a Kieran Trippier free-kick back across goal for Conor Coady to send an overhead kick onto the roof of the Andorra net, before Bellingham dragged a shot into the side-netting as an offside flag went up, Reece James blasted over, and Alexander-Arnold followed suit from a free-kick before the break.

Despite their complete control, England had only managed one shot on target in the opening 45 and Southgate made an interesting tactical change at half-time, with Alexander-Arnold returning to his more familiar right-back role and James dropping into a central midfield quarterback position.

However, rather than pick a pass, James launched a thunderbolt against the Andorra bar shortly after the restart, and England went close again on 52 minutes, when good defending from Christian Garcia prevented Bamford turning in Saka’s pass.

But then came the three changes Andorra would have been dreading and moments later Grealish and Mount had combined to earn the penalty through Garcia’s careless shove and Kane had fired in the hosts’ second.

That broke Andorra’s resistance, with Lingard allowed to convert a third under little pressure from just inside the box on 78 minutes, before Saka nodded home five minutes from time for a memorable and deserved goal of his own to underline England’s dominance.