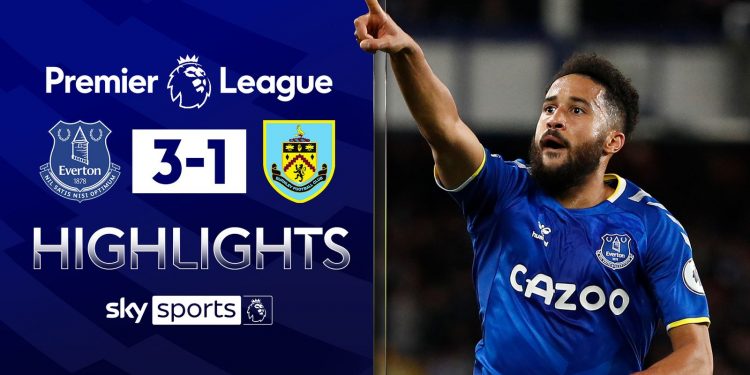 Three goals in seven electrifying minutes gave Everton a 3-1 win over Burnley at Goodison Park to continue their unbeaten start to the Premier League season.

After Burnley had dominated the first half, Ben Mee gave the visitors a deserved lead with a header from Johann Berg Gudmundsson’s cross (53), but the game turned on its head out of nowhere on the hour mark.

First, former Burnley centre-back Michael Keane levelled with his own header from an Andros Townsend cross (60), before Townsend himself curled home a stunner from 25 yards into the top corner (65).

Gary Neville described the goal as “unbelievable” on Monday Night Football, while Jamie Carragher called it “a piece of magic.”

Townsend’s fellow summer signing Demarai Gray put Everton 3-1 up just 27 seconds after the restart (66), racing through on goal from Abdoulaye Doucoure’s pass, while Townsend and sub Andre Gomes came within inches of adding a fourth shortly after.

The result means Everton are fourth with 10 points from four games, while Burnley sit 18th with just one point.

How rampant Everton turned game on its head

The loss of Dominic Calvert-Lewin forced Rafa Benitez into a change of shape, going to a back three with Richarlison on his own in a central position, and it wasn’t working early on as Burnley dominated.

Dwight McNeil’s wicked delivery was perfect for Wood in the opening stages, but the striker uncharacteristically shied away and failed to make proper contact six yards out.

Everton struggled to find their stride or indeed get out of their half for the first 25 minutes as Ashley Barnes and Mee missed half-chances, before Josh Brownhill’s low shot in good space was held by Jordan Pickford.

The game was punctuated by heated moments throughout, with robust challenges from both sides, though Benitez was particularly aggrieved that James Tarkowski escaped punishment for a strong tackle on Richarlison.

Gary Neville is pleased that referees have allowed the game to flow more but the former England full-back says that tackles like James Tarkowski’s on Richarlison should not be encouraged by not being penalised.

Everton finally entered the game just before the half-hour mark as Doucoure’s drilled shot from inside the box was brilliantly kept out by Nick Pope, but Doucoure himself can count himself lucky that rules on physicality have been relaxed this season, wrestling Tarkowski to the ground as he defended a corner but going unpunished, even with a VAR intervention. “It should be a penalty this season,” said Jamie Carragher.

After Everton failed to properly clear a cross early in the second half, Burnley took the lead. The ball dropped to Gudmundsson on the right flank, and his perfect delivery was too difficult to miss for Mee, who nodded past Pickford from point-blank range.

With Goodison Park quiet, nobody could have foreseen the upcoming Everton blitz. Keane’s excellent near-post header from Townsend’s right-wing cross raised the volume, with Benitez then bringing on midfielder Andre Gomes for defender Ben Godfrey, a change he had planned to make even before the goal.

Everton smelled blood and began attacking in waves as Townsend produced the moment of the game, and one of the goals of the season so far. Picking the ball up in space, he took a few touches before curling a wonderful effort into the top left corner from 25 yards, his first Premier League goal for Everton since a summer move from Crystal Palace.

Just seconds after the restart it was 3-1 as Doucoure, given a more attacking role thanks to the introduction of Gomes, picked out the on-running Gray through on goal, and he slotted under Pope for his third Everton goal from just three shots on target.

A rampant Everton weren’t done there and had two big chances to grab a fourth – Pope brilliantly clawed away Townsend’s swerving effort, before Gomes curled just wide of the far post inside the box – and the hectic nature of the game continued before full-time as Tarkowski had a goal ruled out at the other end because of a Wood offside.

There were two changes for Rafa Benitez as he had to do without Dominic Calvert-Lewin in attack. That triggered a tweak in formation to a back three with Yerry Mina and Ben Godfrey starting. Richarlison started up front on his own, while new signing Soloman Rondon was on the bench.

Burnley kept the same starting XI that drew with Leeds, meaning Chris Wood and Ashley Barnes remained in tandem in attack. Club-record signing Maxwel Cornet was in the Burnley squad for the first time.

Though Everton have shown a pragmatism in large periods so far this season under Benitez, those scintillating 15 minutes will give Toffees fans hope that this side can do it both ways as they look to break the top six for the first time since 2014.

Townsend thanks Mum for video

Speaking to the MNF studio, Andros Townsend discusses his man of the match performance against Burnley and how his mum inspired him ahead of the game.

“I have to give a shout-out to my mum because during the week she sent me a compilation video of all my goals and she clipped them all together and told me I need to believe in myself again and I think you saw that with the goal, it was rolling back the years.

“I’ve got that in the locker, I just need to be able to produce it on a more consistent basis.

“Hopefully I can keep getting in the right positions and score more goals and get more assists for this historic football club.”

Everton manager Rafa Benitez on Sky Sports: “I think what the fans want is a team that gives everything and they can see that every day.

“The players of last year maybe they were not performing at the level, now they are giving everything and the fans appreciate that.

“I think that’s just the way to move forward. What I told the players in the dressing room is we have done nothing yet. We are at the beginning, we have to improve so many things but we are really pleased because everybody is trying to do their best.”

Burnley boss Sean Dyche on Sky Sports: “A poor reaction to us scoring. We let them creep into the game and then a mad six minutes follow. You have to make things happen. I think it is a really good away performance until they score. We were waiting for it to happen.

Burnley manager Sean Dyche claims his side lost their edge after taking the lead against Everton at Goodison Park in the Premier League as the Clarets lost 3-1.

“My big feeling is we are way wiser than that six minutes. That is something we have to learn from. The crowd were almost jeering at times, they were on the edge. I am very frustrated with that period.

“My personal view is the game is in a good place. I think the game is getting back to a good state with good physicality.”