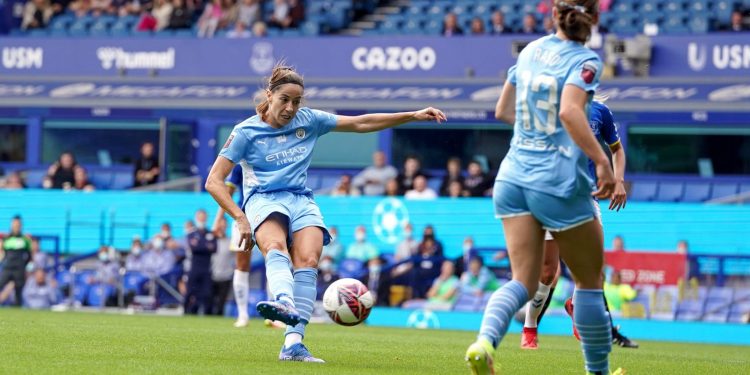 Manchester City Women got their Women’s Super League title charge off to the perfect start as they stormed to a 4-0 win over Everton at Goodison Park.

Gareth Taylor’s side – who have finished as runners-up in each of the past four seasons – broke the deadlock when debutante Vicky Losada fired in off the post (26) before Janine Beckie doubled the lead 10 minutes later.

Prolific Jamaica forward Khadija Shaw added another less than two minutes later (38) and though there was an improvement from Everton after the break, City captain Steph Houghton added the gloss with a stunning free-kick (67).

Victory sends Man City to the top of the embryonic table ahead of the remainder of the opening weekend fixtures, including Arsenal clash against reigning champions Chelsea, which is live on Sky Sports Premier League on Sunday.

How City stormed to victory on Merseyside

It was a frenetic, open start on Merseyside, with chances for both sides and work for both goalkeepers to undertake; Everton’s Sandy MacIver first tipped Hayley Raso’s dipping shot over, before Anna Anvergard seized on a risky pass to fire in a powerful drive that Karima Benameur Taieb beat away.

With 26 minutes gone, Losada – who won the Champions League with Barcelona last season – was afforded time and space to collect a rebound and fire over the line via the inside of the right-hand post to give City the lead.

The goal took the wind out of Everton’s sails and, for the remainder of the half, it was one-way traffic. Beckie doubled the visitors’ lead when she glided into a central position under little pressure and placed a shot into the bottom left corner, while less than two minutes later, Shaw tucked in a third after she was picked out by Raso’s cross.

Toffees boss Willie Kirk introduced Hanna Bennison and Claire Emslie at the break and, in the first 10 minutes or so, it looked as though they might be capable of reducing the deficit, particularly when Danielle Turner came within a whisker with a low free-kick that was tipped behind.

The pendulum soon swung in City’s favour once again though and, moments after Beckie had rattled the crossbar with a shot from distance, Houghton left MacIver rooted to the spot with a sublime curling free-kick from 20 yards out.

Right until the death, the hosts pushed for a consolation, but thanks to a well-organised backline and goalkeeper Benameur Taieb, they were denied one as the game ended in a heavy defeat.

“I think it is a really poor performance. The occasion has maybe played its part. There is no doubting the quality; you could see in spells that we can cause them problems, but the spells just weren’t long enough. We would give the ball away cheaply and out of possession we weren’t aggressive enough or brave enough.

“Being 3-0 down at the break was always going to be hard to come back from and, as much as I thought the second half was improved, it still wasn’t near the standards we have been setting recently.”

Man City’s Gareth Taylor: “It was a really efficient and professional performance. We were put under pressure in different spells. We managed the first part of the game really well and scored some exceptional goals with real quality.

“Everyone played their part from front to back. We were very good. This group has real resolve and resilience. I did an interview outside and saw a couple of our injured girls who came to support. It was crazy seeing that amount of players cheering us on from the sidelines.”