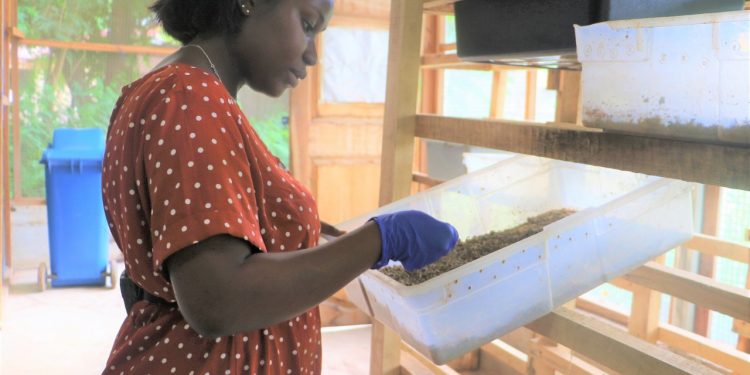 Each year, an estimated one-third of all food produced worldwide for human consumption is lost or wasted, which amounts to 1.3billion tonnes per year. Interestingly, most people do not realize how much food they throw away every day —from leftovers to spoiled produce.

In Ghana, recent statistics by the World Health Organization (WHO) show that Accra, the capital city alone produces approximately 2200 tonnes of solid waste daily, composing about 66% of organic materials, which mostly end up on landfills.

Out of curiosity, Rose Serwaa Oduro, a 25year old entrepreneur and innovator, explored how organic waste can be used in producing feed for animals. This curiosity birthed her company: West African Feeds Enterprise Limited, which now produces an array of animal feed and organic fertilizer products, thanks to support from the first edition of the Waste Recovery Innovation Challenge. The challenge was organized by the United Nations Development Programme (UNDP) in partnership with the Embassy of Netherlands in Ghana, under the Ghana Waste Recovery Platform.

“When I realized we can do a lot with food waste, I gave up my 9 to 5 job to pursue this dream. My passion for agriculture started as a little girl. My dad used to farm in our backyard, and he used to purchase fertilizers at very costly prices. We also had some pets and one of the difficulties we encountered was feeding them as their feeds were so expensive”, Rose narrated.

From the inspiration from her parents’ backyard garden and pets rearing, Rose dedicated much of her time to researching and experimenting, till she discovered that larvae or insects can degrade food waste that can be used for animal feed and organic fertilizer.

As fascinating as it was, she started by setting traps in bushes to attract these larvae, feed them with food waste throughout their life cycle of 6weeks, process these into animal feed and nutritional supplements, and then leave some of the larvae to turn into black soldier flies, which lay eggs to repeat the cycle.

The decomposed food waste also goes through several stages of processing and quality control after which it is then packaged as organic fertilizer for growing crops. West African Feeds has also employed four additional staff to support Rose, to increase production.

For Rose, agriculture is the past, present, and future. We eat every day, so farmers must farm every day. The norm is often to import fertilizers and feeds for poultry, which are often expensive for farmers. So, if we have good alternatives from food waste, which can be sold at a cheaper price, farmers can save about 20 percent of their farming cost.

Rose started West African Feeds Enterprise with only one feed product she named the dry meal. Today, with a grant support of about 27,000 US dollars from the UNDP and the Netherlands Embassy, West African Feeds produces more products, named WAF Meal and WAF Concentrate, which are used in mixing feeds for poultry, fish, and pets in general, and WAF oil which is used as an anti-inflammatory supplement for pets, to protect them from bacteria and diseases.

The grant, according to Rose, was used topurchase a wet milling machine for cutting food waste especially fruit into smaller and suitable pieces for the larvae to feed on easily and faster. She also purchased a separating machine which is used in picking the larvae from the compost, and a dryer for drying the larvae.

“Since we established the business, the UNDP grant is the first funding we got, and this has enabled us to start commercial production. In the past, we were using a knife to cut the fruit waste but now we use the wet milling machine in addition to other machines. This makes the work easier, faster, and safer”, she noted.

Undoubtedly, reduction of food waste can protect the environment and end world hunger, and everyone has a role to play. With the needed investments and collaborations, we can have more young people like Rose, changing the narratives for people and the planet.