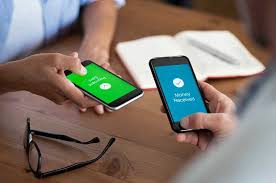 Mobile money has revolutionized the way financial services are delivered around the world. Mobile platforms change lives by reducing costs, increasing transparency, and creating the opportunity for economic empowerment for people and businesses alike.

This was first popularized by Safaricom and Vodafone’s M-Pesa (“M” for “mobile”, “pesa” for “money” in Swahili) in Kenya, which started in 2007.

When the Covid 19 pandemic began its “devastation” across the world in the early 2020s, it quickly became clear that mobile technology, and mostly mobile money, would have an outsized role to play in keeping people connected, delivering vital financial support, and providing safe, no-contact ways to pay for food, electricity, and other life essentials.

Mobile money even became a part of a new daily routine for millions around the world – more than $2 billion have been transacted every day (cf. Andersson-Manjang/Naghavi, 2021). But how does mobile payment work? What are the benefits? Which African countries are the pioneers in using mobile money services?

According to World Remit, Mobile money is a technology that allows people to receive, store and spend money using a mobile phone. It is sometimes referred to as a ‘mobile wallet’ or by the name of a specific service such as M-Pesa, EcoCash, Tigo Pesa and many more. This includes payments (such as peer-to-peer transfers), finance (such as insurance products), and banking (such as account balance inquiries).

Even though, mobile phones are central to plenty of different uses, mobile money is more than just technology – a cash-in, cash-out infrastructure is needed, usually accomplished through a network of “cash merchants” (or “agents”), who receive a small provision for turning cash into electronic value (and the other way around).

With the help of this system, mobile money users can store, send, and receive money with their mobile phone. Items in shops or online can be bought, school fees and bills can be paid, and a top-up mobile airtime can be made easily. In case a user wants to pay a bill or send money to another person, they simply select the relevant service from their phone’s mobile money menu. It is as simple as sending a text message.

Read This: Maersk Ghana lifts suspension on accounts of importers and exporters

There are numerous reasons, why mobile money is an attractive alternative to the traditional cash payment for users (cf. RF Wireless World):

According to GSMA’s “State of the Industry Report on Mobile Money 2021”, between 2015 and 2020 the value of transactions flowing between mobile money platforms and banks has grown fourfold, from $15 billion in 2015 to $68 billion in 2020.

The money flow maintained in close balance between the two systems (see Figure 1). The bar chart below shows the complementary relationship between banks and mobile money of the past five years, in which the proportions of money flows have only deviated slightly from a 1:1 ratio.

Mobile money services have spread rapidly in many developing countries. However, only a handful of these initiatives have reached a sustainable scale. The Philippines in southeast Asia is one of the early adopters of mobile money services as of 2001 when SMART Communications launched SMART Money.

There has also been GCASH for that matter. However, Africa has made giant strides since that time with countries like Kenya, South Africa, Tanzania, Uganda, Zambia, Cote d` Ivoire, Ghana and a couple of others.

Mobile transfers technologies are changing the way-in-way populations relate to financial services in many developing countries. The giant strides made by Africa hold sway to greater opportunities into the nearest future and therefore much more investment for research and innovation are required from various stakeholders to ensure the continent becomes a golden basket.

The African Continental Free Trade Area (AfCFTA) can leverage this low hanging fruit to harness opportunities in job creation and fair trade for Africa`s unstoppable youthful population and to create a conducive atmosphere for them to thrive.

Sarah has a background in International Management and is a Project Manager at PIRON Global Development in Germany. She is passionate about tackling socioeconomic issues in emerging markets. Contact her via (adem@piron.global)