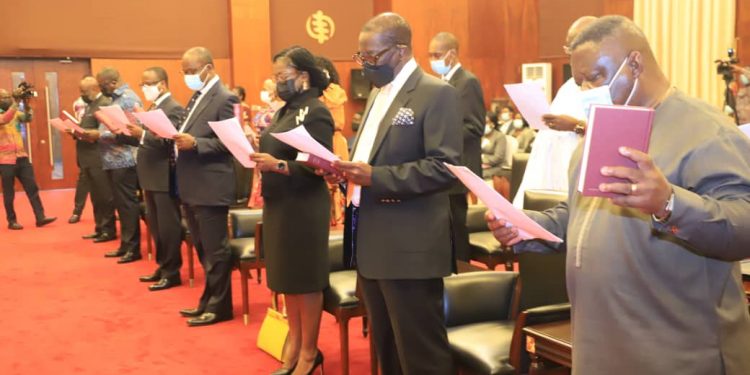 President Akufo-Addo has charged the newly constituted Governing Board of the Bank of Ghana (BoG) to investigate the high-interest rates charged on loans by commercial banks in the country.

Instructing the new Governing Board at an inaugural ceremony at the Jubilee House, the President noted it is not right that while the BoG’s policy rate stood at 13.5 percent, commercial banks were charging above 21 percent on loans.

Adding that, the gap between the BoG’s policy rate and the lending rates of banks should be closed to enhance the competitiveness of Ghana’s private sector.

“I urge the new Governing Board of the Bank to interrogate the issue of high interest rates in the country and how the problem should be addressed to enhance the competitiveness of the private sector.

“It’s surely not right that the policy rate stands at 13.5 percent while commercial banks rate stands at 21 percent and above, this is a gap we have to break if we are to realise the vision of a Ghanaian economy that is globally competitive,” stated the President.

It is expected that the lending rates of banks in the country would be the same as the BoG’s prime rate, but that has not been the case as banks continue to lend to the private sector at a high rate despite the consistent reduction in the policy rate by the BoG.

As at the end of June this year, the average lending rate of banks according to the BoG stood above a little over 20 percent, after a marginal decline in the rate from 21.1 percent in February this year.

Speaking further at the inaugural ceremony of the new BoG Board, the President congratulated the previous BoG Board and the Governor of the BoG, Dr Ernest Addison for their invaluable contribution to the transformation agenda of the government.

“The Bank has made an invaluable contribution to the transformation agenda of my government and because of that, I decided to swear the Board into office by myself to have the platform to express my sincere appreciation to the Board and management of the BoG for the excellent work they have done for Ghana since I took office in 2017.

“The BoG has distinguished itself to the admiration of all persons, it’s proven to be a sound banker to the government and a custodian of the nation’s asset which is money, it’s been an efficient currency manager, a reliable source and regulatory of liquidity and a dependable last resort of lender to banks,” the President stated.

He further congratulated the Governor for the successful clean-up exercise of the financial sector and on the BoG winning the Central Bank of the Year award twice.

Speaking on behalf of the new Governing Board, Dr Addison assured the President that the Board will look into the high lending rates of banks and adequately address it.

“As daunting as the task is, we are confident that we will be able to deliver and pledge to pursue prudent policies to consolidate the gains we have made in the last 4 years.

This positions the bank in the centre of the agendà to push for growth while maintaining the macroeconomic stability in the post covid era, we are therefore committed to deliver on this mandate and given the background of the board we believe we will be able to deliver.

I look forward to dealing with the economic issues of the country particularly the ones you [President Akufo-Addo] have raised which is the interest rate gap between the policy rate and lending rates of banks,” he noted.