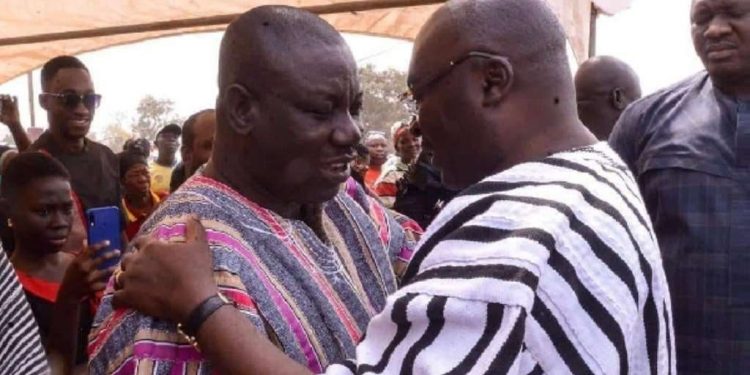 I have watched a video of Dr Mahmoud Bawumia at a TESCON Program at UCC trying so hard in an absurd manner to justify the mess he has run Ghana’s Economy into, in a similar fashion to his ill-fated attempt to run away from his technically deficient analysis of exchange rates developments and the fundamentals of the economy.

We can all now see how the exchange rate has badly exposed Dr. Mahmoud Bawumia. Under Dr. Bawumia, the exchange rate was all over the place before it was rescued by Covid-19, with the dollar even breaking jail and Bawumia PhD made an unsuccessful u-turn with his warped logic concept.

In the video gone viral, Dr Bawumia is heard admitting that the public debt is high though at high risk of debt distress but he then sought to imply that if you borrow unsustainably as they have done, it is prudent debt management and that leads to;

Dr. Bawumia is so naive. Will he use inflation and exchange rate to pay for the debt?

I am at pains to see how unsustainable debt levels that pose high risks of default could achieve any of those variables he listed above.

Real practice over the last couple of years, has exposed Dr Bawumia’s lack of appreciation and technical deficiency in risk-based public debt management. Hence his consistent recourse to rate of debt accumulation and debt to GDP, even though important, are intermediate variables to measure the performance of risk-based debt management.

Dr Bawumia is cunningly misleading people to engage in a less important variable of debt sustainability and risks of debt dynamics to the neglect of major drivers of quality of public debt and their impact on debt sustainability, fiscal risks and external vulnerabilities.

Read This: ADB to divest investments in four companies

It is important to underscore that, even the 91% debt service exclude 2021; The suspended interest payments by some official creditors as part of covid-19 relief to Ghana. It also does not include the deferred interest payments on the zero-coupon bonds.

Ironically, as the reality of how his naivety and technically flawed analysis has led us, Dr Bawumia is now finding succour in inflation and other variables to throw dust into our eyes.

If Dr Bawumia has forgotten, he needs to be reminded of a few of his technically deficient understanding of the workings of major economic drivers.

This is where Dr. Bawumia used just one or two markets and prices of less than 1% of the total basket of goods normally used by GSS to calculate inflation, to extrapolate for the entire country. Which serious economist does that?

Even though it is trite knowledge that, no currency can depreciate beyond 100%, Dr. Bawumia, while in opposition, used faulty “Rate of Change” method to calculate Ghana’s currency depreciation and got some 200%.

Any competent economist should have known that he got it wrong. But he didn’t even notice his technical deficiency. Ironically, he still had the confidence to send the same cedi to the market to buy tomatoes and onions for Hajia Samira to prepare okro soup for him.

Dr. Bawumia attributed exchange rate movements to the fundamentals of the economy without due consideration for exogenous shocks.

When Covid-19 struck, forex demand pressures reduced significantly because Ghanaians were not importing due to lockdown etc, leading to relatively lower demand for the dollar.

This is the height of dishonesty.

I am extremely worried that Dr. Bawumia does not think about how our children are going to pay for his mess and the economic implications of the unsustainable debt burden on the public purse, crowding out of fiscal space to fund badly needed infrastructure and the hardships on Ghanaians that will result from the difficult fiscal corrections that will have to be made to bring the country to debt sustainability.

Whilst Ghana continue to be in the hands of a clueless Dr Bawumia, his continuous display of ignorance and lack of appreciation of the risks facing the country, we must pray and seek spiritual support to rescue him from the ‘demons and principalities.

Let Dr Bawumia stop hiding from the reality of his mismanagement;

Ghana’s debt is confirmed by the World Bank, IMF, and other rating agencies as being one that is at a high risk of debt distress.

Ghana’s debt trajectory in the next 4 years threatens to expose the country to challenges of funding or market access on the international capital markets.

Ghana is the third highest country in Africa and emerging economies with the most outstanding Eurobonds.

Ghana is the country most exposed to exchange rates in Africa and emerging markets as a result of about 64% of its debts being in foreign currency with significantly low levels of net international reserves to cover the debt service obligations and portfolio reversals. The average in Africa is 20% making Ghana 200% above Africa average.

Ghana has the highest outstanding Eurobonds to the size of the economy (GDP) of 17.5% in Africa and emerging economies. This means that as our peers have properly applied their Eurobonds to grow their economies, we are not or we are borrowing beyond our weight.

It is so strange, yet not surprising that clueless Bawumia thinks that these represent prudent debt management. It is becoming obvious, why he has abandoned the economy and now embarked on secondment assignments in IT-related Government Agencies’ systems improvements projects.