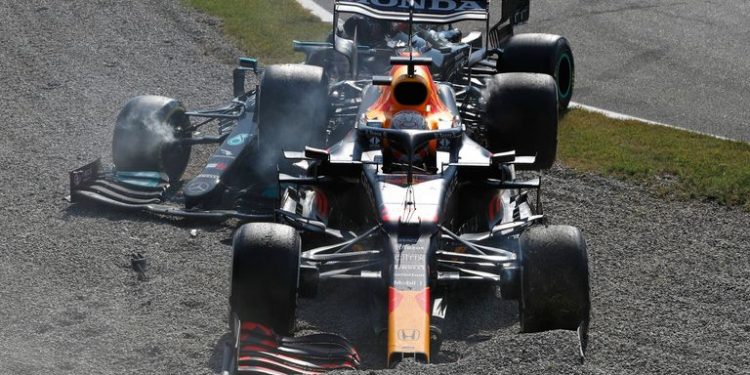 Max Verstappen has been handed a three-place grid penalty for the next Formula 1 race after he was found “predominantly to blame” for the crash with Lewis Hamilton at the Italian GP.

Verstappen will have to serve his penalty at the Russian GP on September 26 as stewards, following a post-race investigation, ruled that he caused the collision that ended both the championship rivals’ races.

The two drivers came together on Lap 26 of the Monza race after Verstappen, attempting to pass Hamilton around the outside of Turn 1 of the first chicane and the inside of Turn 2, hit a kerb and shunted into the Mercedes.

His Red Bull then landed on top of Hamilton, who was thankfully protected by the Halo safety device, before both cars ended beached in the gravel.

“I don’t fully agree with the penalty as I believe it was a racing incident,” said Verstappen.

But F1 Race Director Michael Masi told Sky F1: “The stewards assessment was that Lewis effectively had the corner, and the other element of it was that Max had other options where as we saw at numerous occasions today, drivers in similar types of scenarios took to the bumps beyond Turn 2 and re-joined the track.

“So it was sort of a combination of those matters and in handing down their decision it was that Max was predominantly to blame. So it wasn’t wholly Max’s fault, but that he was more at fault than Lewis at that particular occasion.”

Before the stewards’ verdict was revealed, the Dutchman had argued that Hamilton, who had just exited the pits, didn’t give him enough space.

“He just kept on pushing me wider and wider and at one point there was nowhere to go, he just pushed me onto the sausage kerb. That’s why, at the end of the day, we touched.

“You need two people to work together to make a corner and we are fighting for position. Unfortunately we touched. If one guy is not willing to work, what can you do?”

Lewis Hamilton, however, said Verstappen should have backed out of the corner, while Mercedes even accused the driver who still holds a five-point title advantage over Hamilton of a “tactical foul”.

Mercedes boss Toto Wolff feels the collision between Lewis Hamilton and Max Verstappen was a ‘tactical foul’ from the Red Bull driver.

After a poor Red Bull pit-stop, Hamilton had just got ahead of Verstappen on-track.

“I think in football you’d say it was a tactical foul,” team boss Toto Wolff told Sky Sports F1. “He probably knew that if Lewis stays ahead, that is the race win possibly.”

Lewis Hamilton blamed championship rival Max Verstappen for being too aggressive and causing their collision at the Italian GP.

Wolff also urged stewards to take action on Verstappen, having seen Hamilton penalised for the pair’s collision at the British GP in July,

“I think if we don’t manage that in the right way, this is going to continue,” he said. “They had a high-speed crash at Silverstone, we had one car ending on top of the other one on Lewis’ head here, so how far can you go?

“Maybe next time we’ll have a high-speed crash and land on each other.”

With his Russia penalty, Verstappen will start three places lower than he qualifies at Sochi. Stewards also handed him two penalty points on his license.

The Stewards’ verdict on Verstappen-Hamilton in full

‘Car 44 was exiting the pits. Car 33 was on the main straight. At the 50m board before Turn 1, Car 44 was significantly ahead of Car 33. Car 33 braked late and started to move alongside Car 44, although at no point in the sequence does Car 33 get any further forward than just behind the front wheel of Car 44.

Max Verstappen believes Lewis Hamilton was to blame for their collision at the Italian GP.

‘The Stewards observed on CCTV footage that the driver of Car 44 was driving an avoiding line, although his position caused Car 33 to go onto the kerb. But further, the Stewards observed that Car 33 was not at all alongside Car 44 until significantly into the entry into Turn 1. In the opinion of the Stewards, this manoeuvre was attempted too late for the driver of Car 33 to have “the right to racing room”.

‘While Car 44 could have steered further from the kerb to avoid the incident, the Stewards determined that his position was reasonable and therefore find that the driver of Car 33 was predominantly to blame for the incident.

‘In coming to the penalty the Stewards emphasise that they have only considered the incident itself and not the consequences thereof.’