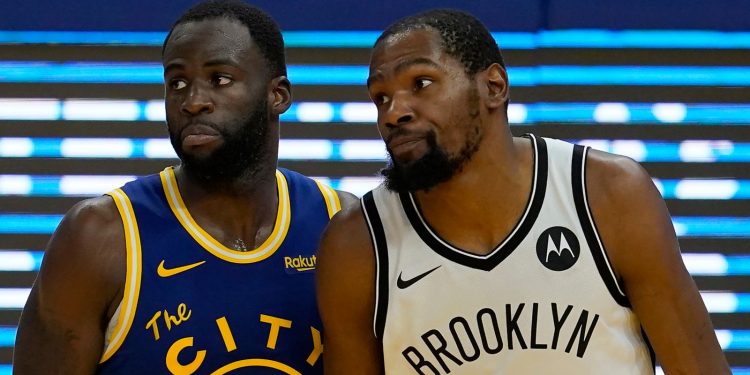 Kevin Durant and Draymond Green cleared the air about the aftermath of their heated on-court confrontation during the 2018-19 season, and why the former eventually left the Golden State Warriors.

Although at odds at times during Durant’s final season with the Warriors, the two appeared to come to the same conclusion during a conversation on Green’s Bleacher Report show, Chips.

In short, Durant and Green contend it wasn’t handled well by coach Steve Kerr and the Warriors’ front office – and that led to the break-up of the team.

“It wasn’t the argument,” Durant said on his decision to leave the Warriors.

“It was the way that everybody – Steve Kerr – acted like it didn’t happen. (General manager) Bob Myers just tried to just discipline (Green) and think that would put the mask over everything. It really felt like that was such a big situation for us as a group, the first time we went through something like that.

“We had to get that (expletive) all out. We tried to dance around it. Just the vibe about all of that, it just made (expletive) weird to me. I’d rather us be who we say we are, family first, communication is key. We didn’t show that. That’s what rubbed me the wrong way more than anything.”

Green said he took issue with being asked to apologise to Durant by the team’s higher-ups. He did agree to speak to the 11-time All-Star instead.

Read This: Arsenal recruitment has been lazy, and Chelsea looked like Man City, says Paul Merson

“I think so too,” Durant said.

Green received a one-game suspension from the team for his actions. When informed of the news, Green said he laughed in Myers’ face.

The argument occurred on November 12, 2018, when Durant reportedly jawed at Green for not getting him the ball in a game against the Los Angeles Clippers. Green responded, reportedly by calling Durant a choice name and telling him to leave the team because the Warriors were a championship-winning squad without him.

The Warriors won two NBA titles during Durant’s time with the team. He then signed with the Brooklyn Nets in free agency.