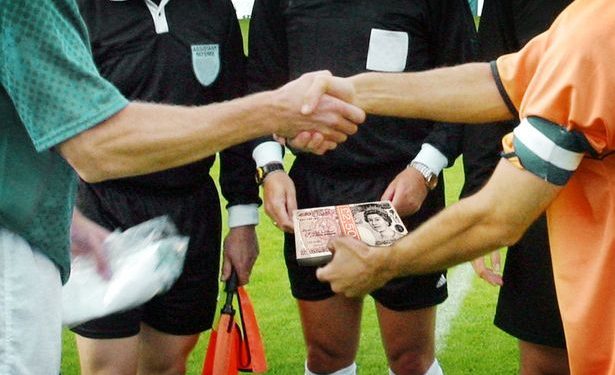 “Football is in a disastrous state, fixing of matches for criminal gambling fraud purposes is absolutely an endemic worldwide, arrogantly happening daily”. These are the words of the director of Sports Integrity at the International Center for Sports security and former FIFA Security advisor, Schis Eaton on the match fixing canker that has engulfed the beautiful game we love.

Corruption in sports represents an important challenge to stakeholders. It can take many forms, including match fixing by players, referees, or team officials and can be difficult to detect. This is a growing problem with new allegations of match fixing regularly reported in the media and according to (Forrest & Simmons 2003), ‘evidence of match fixing can readily be found as unusual patterns in aggregated data from betting market since match fixers profit by placing bets on matches with predetermined outcomes.

Sports betting is a growing industry and has become an integral tool for profiting from fixed matches.

Matches can be fixed in many ways and could possibly involve many different individuals including team managers, staff, players, and match officials.

This article takes a look at some popular match fixing scandals and the influence of sports betting on the outcome of games.

There is a long list of match fixing incidents and of matches that have been widely suspected to have been fixed. Match fixing is not peculiar to football but across most sports. Cricket, Boxing, Basketball, Baseball, American football, Golf, Tennis among others.

There is a huge incentive for offering odds on such obscure sporting events; for legal and illegal bookmakers alike, there are hundreds of billions of Euros to be earned each year. The sports betting market is worth €1.47 trillion every year; Europe is responsible for €309.5bn of this, the US accounts for €147bn and Africa contributes €9.5bn. Those numbers, however, are small compared to Asia’s annual turnover of €950bn.

In 2005,  German football was rocked by the news of a €2 million match-fixing scandal and in the thick of it all was a 25year-old referee, Robert Hoyzer.

The scandal nearly overshadowed the hype and razzmatazz on the 2006 FIFA world cup which was scheduled to be hosted by Germany.

Investigative journalists laid their hands on documents detailing the unscrupulous activities between some players, coaches, and officials which linked them to an organised crime group in Croatia.

The press discovered that Hoyzer was alleged to have met on regular basis in Berlin with members of a Croatian gambling syndicate with links to organised crime.  In return for a large bribe, they persuaded Hoyzer to either fix the result of matches himself or persuade other referees to alter the outcome of games in exchange for money.

However, when Hoyzer became aware of the accusations against him he stepped down from his refereeing duties and made a full confession. He subsequently co-operated with an investigation by the league as well as the resulting criminal proceedings.

Subsequently, he was banned from life for any involvement in football and also was given a two-year five-month prison sentence.

Another referee, Dominic Marks was banned for life and was given a one-year, six-month jail term, whilst two other match officials Felix Zwayer and Torsten Koop received lesser sentences for their role in the affair.

An analysis by security analysts of the German Football Federation on 1,251 Bundesliga football matches from 2010/11 to 2014/15 revealed evidence that bet volume in the Betfair markets for over 2.5 and under 2.5 goals scored in these matches was systematically higher for four referees relative to matches officiated by other referees.

Betfair, bills itself as the “world’s largest betting exchange” and reported 1.7 million active customers in 2015 and a turnover of 475.6 million  British pounds (approximately $694 million). This shows how saturated and complicated the game of football has become with 45% of sports betting now taking place online.

Leading up to this year’s Super Bowl, 23.2 million Americans reported placed $4.3 billion bets on the game. A record 7.6 million people placed bets online, up 63% from the previous year.

The sports betting market in the U.S. generated $1 billion in revenue in 2020, and that number is projected to grow sixfold by 2023. The Industry is a booming one. There have been attempts to cleanse it, however.

Integrity service, Sportradar who monitors bookmakers across 120 countries, processing more than five billion data sets a day – the equivalent of monitoring 300,000 sports matches per year, provides federations and law enforcement agencies with a system for detecting betting related match fixing. Sportsradar collaborates with UEFA through the Fraud Detection System(FDS) which was launched in 2009 to track matches that have been tampered with.

In 2013, Europe coordinated an investigation across 13 countries, exposing a criminal network of 425 match officials, players, and career criminals suspected of fixing more than 380 professional football matches, including European Championship qualifiers and Champions League clashes. According to Hungarian investigator Bajan Nemeth, a Singapore-based betting syndicate is behind the fixes.

One setback in cleansing the system is the plethora of betting operators that have entered the market with some openly sponsoring some football clubs. In the Premier League, for instance, six Premier League clubs display gambling firms on the front of shirts, including Crystal Palace, Leeds United, Newcastle United, Southampton, West Ham United, and Wolverhampton Wanderers. The Championship(second division) in England is sponsored by the Betting and Gaming group Sky Bet.

The cleansing is far from gone with bettors clamoring for an edge, even legacy media outlets have now added a gambling beat to their daily sports coverage.

This has become the norm with radio Sports presenters in Ghana. Segments such as ‘Investment corner’ where the host provides betting tips to listeners have been introduced on most sports shows.

In a playoff game on 28 March 2007, Narnia Fc beat Okwawu United 31-0 at the Sekondi Gyandu Park while Great Mariners were 28-0 winners over Mighty Jets. The results shocked the football world. The four clubs involved were severely punished by the Ghana Football Association.

In 2008, The Ghana Football Association denied extracts of a book published by a Canadian author claiming that the 2006 World Cup second-round clash with Brazil was fixed.

Journalist Declan Hill writing in the book ‘The Fix’ alleged that an Asian betting syndicate influenced the result which led to Ghana’s 3-0 defeat at the hands of the South Americans.

The wildest match fixing scandal to hit the West African Nation happened on the last day of the Ghana Premier league about a  fortnight ago involving relegation-bound Inter Allies and Ashanti Gold.

Video clips of the goals went viral which restarted the conversation on match fixing in sports, particularly football.

“After the game, my technical team commended me for spoiling the bet they had staked,” the 24-year-old revealed to the local radio station, Kumasi FM.

“I promised my coach that if he allows me to play from the bench, I will spoil the bet. And after the game, my team congratulated me.” He said.

Musah revealed the reason behind his actions and in his own words “I heard it in our hotel that a bet had been made for a correct scoreline of 5-1 against my club, Inter Allies.’

“I decided to spoil that bet because I don’t condone betting.” He added.

His interview may have overshadowed the fact that eventual champions, Accra Hearts of Oak were lifting their first title in 14 years, but it did generate and resurrect a discourse in the sporting world over the influence of betting in the game and its relatedness with match fixing and Corruption.