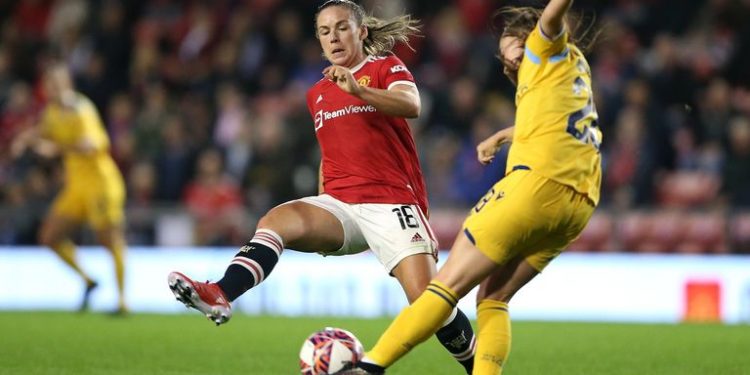 Kirsty Hanson and Ona Batlle got Manchester United Women’s WSL campaign off to the perfect start with goals in either half to earn a 2-0 win over Reading Women.

Ella Toone, starting the game as a false nine, dropped deep to thread a perfect ball through for Hanson to slot home six minutes before half-time for the division’s first goal of the new campaign, and the first game broadcast on Sky Sports.

United had started the opening half slowly and six minutes into the second they perhaps should have been pegged back when Brooke Chaplen’s strike from just inside the box thundered off the underside of the crossbar and may have crossed the line before bouncing clear.

Without goal-line technology available to give a decisive ruling, United escaped unscathed and three minutes later provided further frustration for the Royals when left-back Batlle thundered in a second from the edge of the area.

It was plain sailing from there for the hosts, who would likely have added to their tally had debutant substitute Martha Thomas not dragged her close-range effort wide after a defensive mix-up, but victory was sweet enough for new coach Marc Skinner in his first match in charge at the Leigh Sports Village.

Royals wonder what might have been but Red Devils worthy winners

United had been beaten 2-0 by Reading on home soil last season and may have had that in the back of their minds in the opening minutes of a nervous start to their new campaign.

Chaplen fired in a warning shot inside five minutes which kept rising over Mary Earps’ bar, but without further pressure on their goal from that moment the hosts grew into the half and almost went ahead when Leah Galton fired wastefully over after a cross was missed by both Deanna Cooper and goalkeeper Grace Moloney.

There was better news for the home supporters six minutes before the break. Toone, who had looked isolated early on, slipped a lovely ball through for Hanson to break clear of the Royals backline and beat the onrushing goalkeeper from the edge of the box. “She has been on fire all pre-season, and she’s carried on where she left off,” ex-Utd goalkeeper Siobhan Chamberlain said on Sky Sports.

Reading needed more goalmouth action and began the second half with a decent claim to an equaliser. The on-field officials had little time to decide whether Chaplen’s pile-driver landed over the line after cannoning down off the crossbar, and erred on the side of caution without goal-line technology to help them.

The Royals had a bitter pill to swallow when falling further behind moments later, as Toone again turned provider to slip a ball inside and open space for Batlle to lift a fine finish into the top corner past a stranded Moloney.

United now had a swagger about them and only a poor finish from Thomas, perhaps rushing her effort on her debut, deprived them of a late third. Victory was long-since assured, though, and earned a perfect start for Skinner in his first WSL game for more than two years.

Man Utd manager Marc Skinner: “Ella has this wonderful ability to turn – not unlike a Karen Carney – in those pockets of spaces and play it forward.

“We knew we could hurt Reading between those lines and put their defenders into indecisive moments themselves. With her ability, her vision and sharpness between the lines, it was a no brainer to put her in there tonight [as a false nine] and just use her slightly differently.”

Reading manager Kelly Chambers: “We’ve got to stick at it. For us, we’ve got to find where we need to balance our emotions when we’re under the cosh. We have to continue to play the way we want to play, and we lost that focus.

“There were two defining moments, the goals, and they were our undoing tonight.

“I thought it [Chaplen’s shot] was in, but I was looking at a different angle. It makes it harder [seeing it again]. It would’ve changed the game – we built a bit of momentum from that moment, and were back in control. If that had stood, it would be completely different for the rest of it.”

Player of the match – Kirsty Hanson

“I’ve got to give it to Kirsty Hanson, scoring that vital opening goal, it was a fantastic finish.

“It’s easy to pick a goalscorer, but she’s worked so hard, pressed throughout, tracked back, defended, and I think she’s put in a brilliant performance for her team.”

“Reading have got players to come back in, that wasn’t their fully-fit squad tonight. They’ve got Natasha Dowie and Deanne Rose to come in and they are two really exciting players to come into their attacking line.

“They dominated possession for the first 30 minutes, they just couldn’t do anything when they got into the attacking third. Once they have those players, I think they’ll be fine.”

“If we’re all playing in the same stadiums and have the ability to have it, fair enough.

“Funds can be allocated to other places right now, to making the referees better, to giving opportunities to be professional and better – and then the next step is that.”