Manny Pacquiao may have boxed for the final time 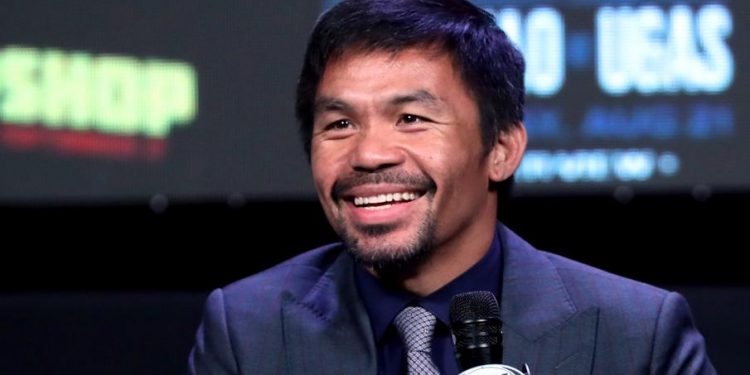 Manny Pacquiao may have boxed for the final time

The thing about Manny Pacquiao is that, for all his in-ring greatness and ferocity, he wasn’t perfect. And he did it with a smile.

Everybody has a story, a favourite memory. His dog ‘Pacman’. His singing. The face-offs where he bursts out laughing. The hilarious Scottish accent.

The darts match with Ricky Hatton in a Manchester pub, with a grin stronger than the beer on tap, is surely a highlight. Not long after, he thrashed Hatton in two rounds in a peak performance of aplomb and bombast.

Pacquiao made people laugh, then he made people sit on the edge of their seats when he became a whirlwind of electric punches. He is not the first fighter to combine those traits, but for the past 20 years there has been nobody better at it.

Suddenly, the smile became forced when, on Saturday night, Pacquiao lost a unanimous decision to Yordenis Ugas in a WBA welterweight title fight in Las Vegas. It is likely the last time we will see him in the ring as he gears up to run for the presidency of the Philippines.

“I don’t know,” he said but it looked, and feels, inevitable that a once-in-a-lifetime career has ended.

Pacquiao is now 42 and was returning from a two-year absence. Although he brilliantly ended Keith Thurman’s unbeaten record and title reign as a 40-year-old, the most recent and older version of Pacquiao was a ghost of the lightning-quick and viciously powerful puncher of most of the past two decades.

He was due to fight Errol Spence Jr, the pound-for-pound feted IBF and WBC champion, who withdrew injured but just by signing his name on the dotted line for such a dangerous fight at this stage of his career is why Pacquiao must be cherished.

In the end, it was perhaps a relief that he wasn’t sharing a ring with the brilliant Spence Jr.

Pacquiao leaves behind a legacy that won’t be repeated and scarcely seems real. The only boxer to be a world champion in four different decades. The only man to win world titles in eight divisions. There is nobody ever who sailed through weight after weight with such success. Seventy-two professional fights, 62 wins.

The numbers are mind-boggling but tell only half the story.

Pacquiao was raised in abject poverty in General Santos City underlined by his father killing and eating their pet dog. He ran away from home, heartbroken, and lived on the streets in Manila selling doughnuts to make some money.

From hopeless desperation he became one of the biggest sports superstars in America. It is a journey the scale of which is impossible to truly comprehend, but it is made more otherworldly when you consider that no Asian sportsperson had transcended the US sports market like Pacquiao did. It was unheard of for a non-American or Hispanic boxer or sportsperson to achieve the mainstream recognition that he did.

All the while with a smile on his face, professing his love of basketball even though, at 5’5”, he could not slam dunk. No matter.

His partnership with Hall of Fame trainer Freddie Roach is now one of boxing’s most successful. Roach welcomed a teenage kid to his Wild Card gym 20 years ago. He now suffers with Parkinson’s disease but Pacquiao is by his side, together where they belong, even if this wonderfully odd relationship was threatened in 2017.

Pacquiao’s entourage was growing and was vocal. Roach worried that boxing and politics did not mix. They did not speak for a long time but reunited, just Manny and Freddie, over a handshake with no need for a paper contract.

Pacquiao had an entire career before arriving in the US in 2001 for his 35th fight against Lehlo Ledwaba, the opponent whose recent death he paid tribute to.

In those early years he was knocked out twice before anybody had ever heard his name. The first to do it, Rustico Torrecampo, is the stuff of folklore because he became a fugitive wanted for murder. Pacquiao has aided his old adversary’s attempts to piece his life back together over the years.

His trio of stoppage victories inside a 12-month span over Oscar De La Hoya, Ricky Hatton and Miguel Cotto must rank among the best year-long periods of the modern era, and shot Pacquiao to superstardom.

“The second-biggest market in the US is the Hispanic market,” explains MP Promotions president Sean Gibbons. “To this day, the second-biggest fighter in Mexico behind Saul ‘Canelo’ Alvarez is Pacquiao. That’s because he beat all their guys.”

Even when losses crept in, he gamely recovered. He put right the Timothy Bradley split decision. He regained his footing from a horrific KO by Marquez to continue battling at the sharp end. He has lost eights times.

Even the latest iteration of Pacquiao, in his late-30s and early-40s, lost controversially on the scorecards to Jeff Horn in Australia. He still came back to impressively end Keith Thurman’s title reign and undefeated record.

The one result that will keep Pacquiao awake at night is the loss to Floyd Mayweather, a generation-defining fight became one-sided in his eternal rival’s favour.

That humbling will never escape Pacquiao.

“Manny’s overall body of work blows away what Mayweather accomplished,” his ally Gibbons has claimed. It is an argument that will rage for years to come.

Mayweather’s perfect 50-0 record and the total absence of any obvious struggle in his career marks him out as an utterly unique wizard of the ring. It also, alongside his ‘Money’ moniker, isolates him from the real-world understanding of his admirers.

The grinning Pacquiao has no such problem.

The man known to those closest to him as The Senator now likely has a future in “a more difficult world than boxing”, as he calls it, as he eyes the President’s office in the Philippines. Some of his views have previously been criticised and will come under the microscope again. Elections are in May 2022 and, Sky Sports were told, he can no longer juggle boxing and politics, as he has done for more than 10 years, if he decides to run for the top job.

“I want to help the people,” he said on Saturday night about those aspirations.

If that means bringing a glorious in-ring career to an end, the timing feels right.

Thank you for the smiles, Manny.