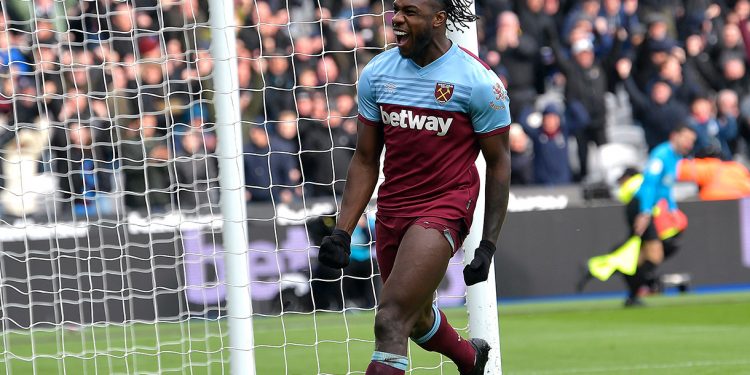 Sky Sports’ Jamie Carragher called the newly-crowned No 9 a “special player” after a stellar solo performance but he had to wait for his moment in the Hammers’ sensational victory, with Pablo Fornals opening the scoring from a one-two with Said Benrahma after Jamie Vardy’s poor pass.

The Argentine was left on the floor minutes before half-time by Ayoze Perez and after a VAR review noticed a stamp from the Foxes man on Fornals’ shin, Michael Oliver showed him a straight red card.

Leicester made their own task harder when Caglar Soyuncu’s blind backpass was picked off by Antonio, who teed up Benrahma to fire in from 18 yards.

Antonio would then take centre stage for himself late on to become the club’s record Premier League scorer. He held off Soyuncu to power home his 48th league goal for the club, breaking Paolo Di Canio’s record and then celebrating with a cardboard cut-out of himself.

He then moved within one of his half century four minutes later, taking one touch from Vladimir Coufal’s cross to take the ball away from his man, and beating Kasper Schmeichel with a second to spark yet more wild celebrations among West Ham’s first full home support since February 2020.

“He is a special player and if he cost West Ham £50m or £60m, they would be raving about what they had done in the transfer market,” Carragher told Monday Night Football after the match. “We talk about him as a personality, we all like him. But what should not be lost is his absolute quality as a player.”

West Ham now lead an embryonic Premier League table on goals scored by virtue of their comprehensive victory, while Leicester are left to lick their wounds on the back of a painful defeat in the capital.

West Ham were the only team to do the double over Leicester in 2020/21 and once again frustrated the Foxes’ impressive forward armoury from the off, while looking dangerous themselves on the break.

Their direct approach nearly bore fruit several times early on at the end of patient but impotent Leicester attacks, but it was a move of the kind their visitors have become known which would bring them the first goal.

A loose ball from Vardy was picked off by Declan Rice on the half-way line and three passes later, was in the back of the Leicester net. Fornals started and finished the move, finding Benrahma on the left before stroking his low cross exquisitely into the far corner.

The Foxes were dealt a worse blow before the break when Perez’s stamp on Fornals, missed by referee Michael Oliver, was picked up by VAR and after a brief glance at the review monitor, the official reached for his back pocket.

Leicester were incensed. Kasper Schmeichel was still arguing the decision when the sides disappeared at the interval but had some similarly choice words for one of his own team-mates soon after they re-emerged, when Soyuncu’s awful back pass put him in no man’s land and left Antonio to roll the loose ball across and give Benrahma a simple finish.

It was time for the Hammers’ main man to add the goals his performance deserved. 10 minutes from time he controlled Rice’s pass, outmuscled Soyuncu and lashed past Schmeichel to break Di Canio’s long-standing record, before moving further beyond it when firing Coufal’s cross in to round off a stunning night, and one the Hammers ended top of the Premier League for only the second time in history.

West Ham manager David Moyes on Michail Antonio’s performance: “I didn’t think he’d made the right choices with the ball in the first half a few times, but he was a different class after half-time, with his link-up play and positioning.

“His goals are typical Mich. He can score so many. I didn’t think he made the right choices in the first half but in the second half he was different class.

“He’s only been at centre-forward for the last 18 months or two years. He’s gone on from there and he’s looking a real handful. His all-round play has improved so much.”

Leicester boss Brendan Rodgers: “I was proud of the players’ mentality and spirit. We made mistakes and got punished.

“After 65 minutes, we’re still in the game, 2-1, we then are looking to make some changes to keep fighting. We stayed in it against a good side, and then conceded the third goal which made it very difficult. Michail’s finished his two goals very well, and we lose the game 4-1.”

Michail Antonio: “I thought, I’m making history, I’ve got to do something special. Did any of you get what celebration it was?

“Save the Last Dance [sic: Dirty Dancing] – the lift from the end!

“It was an amazing night. The fans enjoyed it, we enjoyed it. There’s nothing better than scoring a goal and hearing a roar from the fans.”