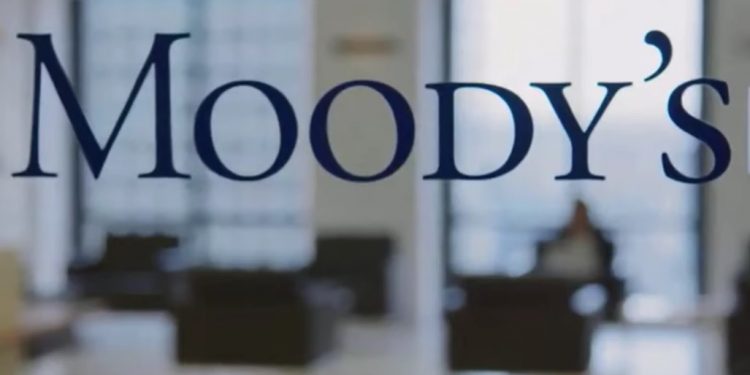 The rating according to Moody’s reflects the country’s high debt burden, continued weak debt affordability, high gross borrowing requirements and ongoing liquidity challenges in the face of downside economic, social and financial risks in the aftermath of the Covid pandemic.

Aside the country’s high debt burden and continued weak debt affordability, the credit rating agency in its rating also took into account the country’s improving growth prospects, resilient external sector performance and the country’s continued access to domestic and international capital markets, supported by the government’s structural economic reform agenda to improve export competitiveness and broaden the revenue base.

“Ghana’s credit profile is characterized by large gross borrowing requirements that exceed 20% of GDP, as well as persistent weak debt affordability stemming from interest payments rising to over 40% of revenue — both of which are among the weakest of sovereigns rated by Moody’s, underpinning its exposure to potential funding shocks.

“Both long-standing credit characteristics are the result of a high debt burden financed at relatively high costs and relatively short maturities. These vulnerabilities have been exacerbated by the pandemic. The fiscal deficit widened to 13.9% of GDP in 2020 (inclusive of costs associated with the financial sector clean-up and “take or pay” energy contracts), pushing the debt burden beyond 80% of GDP, from 62.6% in 2019,” noted Moody’s.

According to Moody’s, while the government’s most recent budget sets out a plan of fiscal consolidation to reduce the fiscal deficit to 4.8% of GDP by 2024, the longer-term economic and social scarring from the coronavirus shock presents significant challenges to achieving such ambitious targets.

Adding it assumes that the pace of consolidation will be slower, leaving the debt burden above 80% of GDP for the foreseeable future.

“In the meantime, Ghana will increasingly rely on domestic and international bond issuance to meet deficit financing requirements and eurobond maturities starting 2023 and rising to $1 billion per year 2025-2027, leaving the sovereign exposed to a potential unfavorable turn in investor confidence,” stated Moody’s.

Read This: BoG’s SDR holdings with IMF decline by Ghs 100 million in a month

It therefore expects GDP growth to rise towards 6% in 2022 and stay around these rates in the medium term — in the absence of new shocks.

Meanwhile, Ghana’s external position which has been a credit weakness in the past, has remained relatively stable through the pandemic, denoting greater resilience.

“The current account deficit was stable last year at 2.6% of GDP. Assuming steady commodity prices, Moody’s expects the deficit to remain relatively narrow around 3% of GDP”, it said.

“Foreign exchange reserves, at four months of imports cover, have been bolstered by the recent eurobond issuance and gold and cocoa production that continues to perform well. Coupled with the ramping up of oil and gas production from the Pecan field, export prospects remain favorable.

“Ghana also has a track record of political stability and relatively sound institutional and governance frameworks compared to peers, most recently demonstrated in the peaceful elections in late 2020 and continued implementation of the economic reform agenda to improve export competitiveness and broaden the revenue base”, it added.