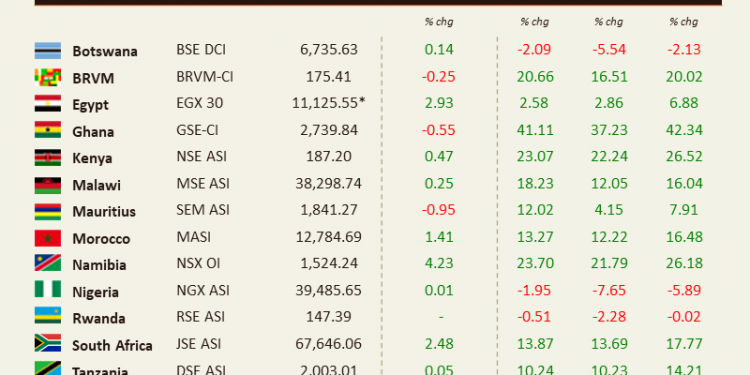 Zimbabwean equities shed 1.24% this week, the most on the continent. The sentiment was mainly positive on African equity markets this week.

Among the 17 markets we covered, twelve advanced while four retreated and one remained flat.

BRVM – Equities in Abidjan cooled down this week after seven consecutive weeks of positive performance. Overall, the Composite Index shed 0.25% WoW to close at 175.41. Market activity declined 8% as XOF 374m (USD 0.67m) worth of shares changed hands every day on average compared to XOF 407m the week before.

UACN Property Development is the top performer. Shares in the property developer jumped 37.6% and are now up 131.65% YTD. The market heavyweight, Dangote Cement, remained flat at NGN 249.6 on Friday and is up 1.92% YTD.

BVC – Moroccan equities rallied as the MASI rose 1.41% WoW. Market activity increased 5.5% as MAD 74m (USD 8.3m) worth of shares changed hands every day on average compared to MAD 70m the week before. The total market capitalisation stands at MAD 656.2bn (USD 73.12bn), up 13.27% YTD. M2M Group is once again among the top performers this week.

Shares in the technology company that provides processing solutions, securities management, and other electronic services advanced another 7.9% and are now up 20.13% YTD. The heavyweight, Maroc Telecom, closed at MAD 141 on Friday (up 1.40% WoW). The stock is down 2.76% YTD.

El Shams Housing and Urbanization SAE is once again among the top performers. Shares in the real estate developer jumped another 50.6% WoW and are now up 2554.75% YTD. The Egyptian heavyweight, CIB, closed at EGP 47.18 (+3.94% WoW) on Thursday. Shares are now up 6.28% since the start of the year when adjusted for the capital increase. Fawry, the listed fintech company, closed the week at EGP 16.18 (down 3.23% WoW).

Indeed, it announced that its team of engineers have so far crossed the 450 meters of a drilling depth (the most difficult part) of the first of eight geothermal wells for the state-owned electricity producer, Ethiopia Electric Power Company. It projects it will complete drilling of that first well within two months. The counter is now up 4.46% YTD. Safaricom closed at 44.35 KES (down 0.22% WoW). Shares are up 29.49% so far this year.

JSE – South African equities rallied this week. The JSE ASI rose 2.48% WoW to close at 67,646.06, with the best performances coming from precious metals, resources and banks, which gained 5.69%, 4.64% and 4.57%, respectively. The South African market ended the week in green territory as US Federal Reserve chair Jerome Powell’s softer tone saw money rush back to emerging markets. Powell indicated that the Fed could begin withdrawing some of its easy-money policies before the end of the year, though interest rates hikes may still be some way off.

Master Drilling Group is among the top performers this week. Shares in the drilling services company soared 20.3% WoW despite the fact that it revised its earnings growth expectations down. Indeed, on Thursday, the company published an updated trading statement, noting that it now expects its earnings per share (EPS) for the six months ended June 30, to increase by between 61% and 66% year-on-year to between 85.90c and 88.50c. Previously, the company anticipated an EPS increase of between 77% and 87% to between 94.70c and 100c. Shares are now up 35.73% YTD. The JSE heavyweight, Prosus, closed higher at ZAR 1,247.85 on Friday (+1.70% WoW). Shares in the tech investor are now down 22.31% YTD.