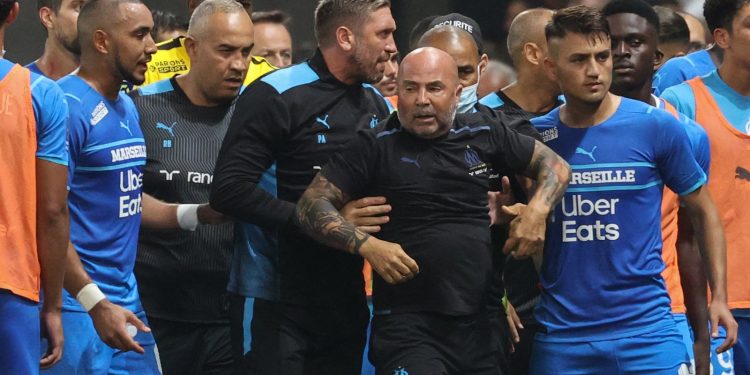 A French league match between Nice and Marseille was abandoned on Sunday after home fans threw projectiles and invaded the field.

With about 15 minutes remaining, Marseille midfielder Dimitri Payet was hit on the back by a bottle thrown from the stands.

Supporters had earlier been warned against throwing objects by the stadium announcer.

Payet threw the bottle back into the crowd, prompting a significant number of Nice fans to rush the field, and a melee ensued involving players and supporters.

The referee halted the match, with Nice winning 1-0 at the time, and both teams retreated to the tunnel.

Play was held up for 90 minutes before referee Benoit Bastien declared the match abandoned, with Nice players having returned to the pitch several minutes earlier, while the Marseille players refused to join them.

Nice president Jean-Pierre Rivere had appealed to Nice supporters over the sound system for calm during the delay, but angry Marseille players and staff were adamant in refusing to carry on.

French daily L’Equipe reported that visiting players Payet, Matteo Guendouzi and Luan Peres were injured in scuffles with the crowd and that riot police were deployed in front of the tier packed with Nice fans.

Swedish striker Kasper Dolberg had put Nice ahead in the 49th minute.