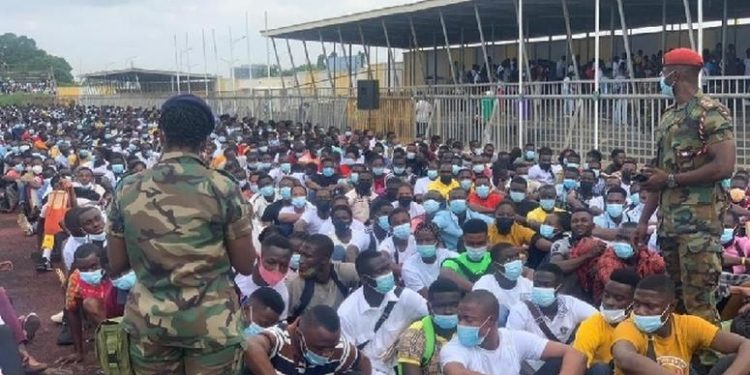 It’s that time of the year again, and the nation’s security services have opened applications for eligible citizens to be recruited. This is not just a call to serve God and country but an avenue to reduce unemployment and also provide legitimate income for some families.

This is a great call, but as usual, recruitment processes barely end without hearing of cases of people getting defrauded by imposters. Some of these perpetrators being personnel of the services who promise to secure a spot for their victims at exorbitant fees but end up failing to do so. Others being the so-called big men in Government.

Is it a crime to want to serve one’s country? These days, one risks being defrauded to want to serve the country. As if being unemployed is not bad enough, being scammed adds insult to injury.

Should recruitment into the services be an avenue to make money for some people?

It has become farfetched for individuals who want to go the right way to get recruited. Paying for recruitment is becoming the norm.

In fact, should employment be about “whom you know”? I guess not.

It should be about one’s eligibility and skills. This tells us how sick and deteriorating our system is as a nation.

I ask myself, “Why can’t our beacon of discipline – the security services – be devoid of the gross rot in society?” I guess that is due to the crass interference of the politician.

The constitutional power given to the politician to appoint competent security chiefs does not translate into recruiting based on political affiliation.

The standards of our security services keep diminishing, such that we now have inappropriately dressed personnel, uniformed men robbing citizens at gunpoint, etc.

Whom do we call for rescue when the state-trained rescuer is the aggressor?

The security chiefs and all stakeholders need to lay down robust policies to review the standards of our noble organizations which keep getting unattractive by the day.

Publishing communique is not the only solution to fighting recruitment fraud but a complete restructuring of how we recruit personnel.

For instance, we can emulate that of the United States where they have recruiters from a recruiting command responsible for manning their armed forces.

This can be done for all our security services and not just the Ghana Armed Forces.

These recruiters of the various services should be trained and dispatched across the nation to educate and process interested candidates by ensuring they meet the requirements when applications are opened.

Every eligible Ghanaian must be allowed to serve regardless of political affiliations and connections. The services are neither dumpsites for the party faithful, nor are they cheap occupations to be bought.

Let us arise and fight for Mother Ghana, and raise the standards of the services.