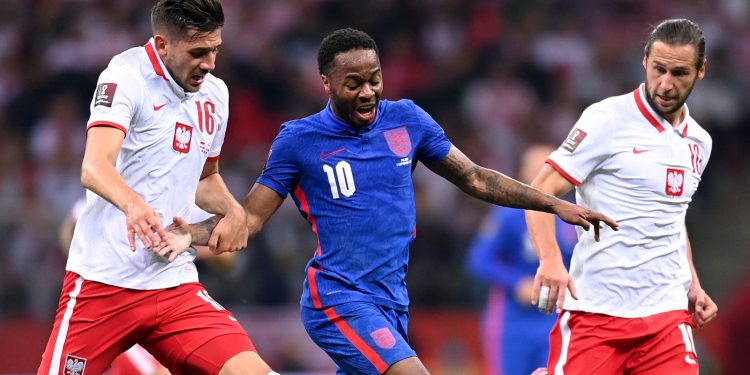 England’s perfect start to World Cup qualifying ended in dramatic fashion, with a last-gasp equaliser grabbing Poland a 1-1 draw in Warsaw against Gareth Southgate’s side.

The visitors had been on course to make it six wins from six in Group I thanks to Harry Kane’s stunning long-range strike (72) but two minutes into stoppage time Robert Lewandowski crossed for Damian Szymanski to head in at the back post.

England had struggled to carve out clear chances in the first half against a physical and fired-up Polish side but were much improved after the break, with Harry Maguire heading against a post before Kane unleashed a fine swerving effort from 30 yards.

It was the 15th consecutive major tournament qualifier Kane had scored in and took his overall tally to 41 strikes in 64 appearances, moving him into outright fifth on England’s list of all-time top scorers. But it wasn’t enough to deny a Poland side roared on by their passionate fans inside the National Stadium.

With four games to go, England remain top of their pool, four points clear of second-placed Albania and favourites to qualify for the Qatar World Cup in first place, though, with Andorra and Hungary next up in October.

Poland had secured five draws from their previous seven meetings with England at home and a packed National Stadium in the capital provided an intense atmosphere from the first whistle, which sparked a frantic start to the match, with Tymoteusz Puchacz drilling a volley against Kyle Walker.

With Kalvin Phillips harshly booked and several decisions going against England early on, Southgate’s side were looking frustrated, but after riding the early storm, Mason Mount shot over and Kane miscued a header.

However, with Lewandowski in their side, Poland were always a threat and Jordan Pickford had to be sharp just before the half-hour to prevent the Bayern Munich striker lobbing the ball over him in the box.

After a physical opening 45 minutes, tempers boiled over on the stroke of half-time, with Maguire and Kamil Glik booked for an altercation as players from both sides clashed.

England let their football do the talking after the break, though, with Jack Grealish fizzing the ball across the face of goal, Raheem Sterling dribbling dangerously in the box, a Luke Shaw cross just evading Kane and Phillips firing straight at Wojciech Szczesny within the first 10 minutes of the second period.

The visitors were inches away from the breakthrough on the hour, when Maguire directed a header from a set-piece against the far post before Sterling was flagged offside but Kane found the net in spectacular fashion soon after.

Lewandowski had scuffed a tame effort from outside the box at Pickford at the other end moments earlier but Kane showed his prowess and ball-striking brilliance by drifting the ball away from the reach of Szczesny.

There was a hairy moment for Pickford with 10 minutes to play when his clearance cannoned into Karol Swiderski and flew back towards his own goal but the goalkeeper was able to recover to spare his blushes.

But there was nothing he could do when Szymanski out-jumped Shaw and powered home his decisive header deep into injury time to grab a point for the hosts.

What the manager said…

England boss Gareth Southgate: “Overall, we’re pretty pleased. In the opening 15-20 minutes it was difficult to get control of the game. We’re away from home against a proud country who have got some good players. As the half wore on I thought we started to get a little more control without ever looking like creating a clear-cut chance.

“But then second half I thought we controlled the game. A fabulous goal, a fantastic strike. Again we probably didn’t create many clear-cut chances, we didn’t get as many men in the box as we’d have liked at times and there were a couple of sloppy moments at the end where we could have conceded a goal and then we did concede a goal.

“We’re right to be disappointed only to take a point because we shouldn’t concede. But the players have been fantastic this week and we’re in a really strong position in the group.”

Analysis: Do England have an issue holding onto leads in big games?

For much of this match, Gareth Southgate will have been encouraged. There were partnerships all over the pitch. Harry Maguire and John Stones. Kalvin Phillips and Declan Rice. Perhaps most excitingly, the combination play between Luke Shaw, Jack Grealish and Mason Mount is beginning to prove a real asset for this England team.

The late Poland equaliser means the end of the perfect record but it should not mean the end of the optimism. England are on course to qualify for the World Cup. The momentum can continue. This was just a reminder that there is work still to do.

Kyle Walker was beaten in the build-up, Mount missed a chance to clear and Shaw was beaten to the header with Grealish looking on. But Southgate is mature enough to begin by looking at himself rather than his players. Does he have a problem closing out tight games?

The sample size in international football is never big but all three tournament finals for Southgate’s England have ended in defeat after being 1-0 up midway through the second half. They were overhauled in the World Cup semi-final against Croatia, the Nations League semi-final against the Netherlands and beaten on penalties by Italy in the Euro 2020 final.

This draw in Warsaw was not of that magnitude, of course, but it was their biggest competitive test prior to next year’s World Cup in Qatar and it follows that same trend. The lead was just about deserved. But so was the equaliser as England retreated.

Southgate’s side tired in those aforementioned matches and there were signs of that here too, but the substitutions did not come. Not one in the 94 minutes. The manager might wonder whether Mount or Grealish could have made way for, say, Jude Bellingham.

He should not be too concerned. This was a confident performance from a team that continues to grow. England are sure to be in Qatar. It is just that we may now have to wait until they are there to find out whether they have the knowhow to hold onto these leads.

England return to World Cup Qualifier action next month, when they go to Andorra on October 9 and host Hungary at Wembley on October 12.