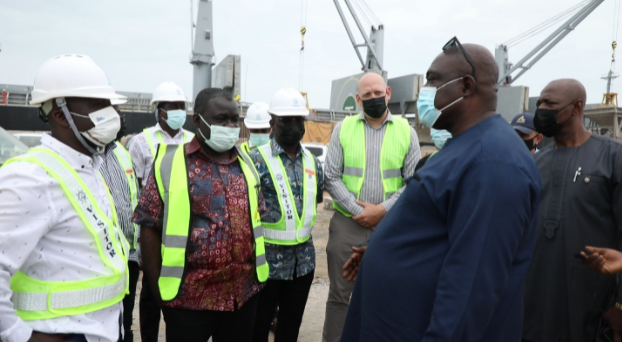 The Minister of Transport, Kwaku Ofori Asiamah together with his two deputies, Hassan Tampuli and Frederick Adom have paid a 2-day working visit to the Port of Takoradi, Axim and Dixcove fishing landing sites.

The purpose of the visit was to inspect expansion works at the Port of Takoradi and also introduce his deputies to the Management of the Port.

He inspected the liquid bulk terminal which was commissioned last year by the Vice President, Dr. Mahamudu Mawumia, the dry bulk jetty as well as the ongoing construction of the Atlantic Container Terminal.

He expressed optimism that the Port of Takoradi will soon become the port of choice in the west African subregion.

The Minister revealed that due to the change in engineering, the first vessel would call the Terminal by the end of December.

Earlier, the Minister and his entourage visited the Axim and Dixcove fish landing sites where works are progressing steadily.

In Axim, 2.5 hectares of land has been reclaimed from the sea and a breakwater of 500 meters long has also been constructed.

A portion of the reclaimed land would be used by the fisher folks and the other portion for future development.

The Minister of Transport said but for the covid-19 Pandemic, the construction would have reached an appreciable level. That notwithstanding, the Minister said he was very impressed with works on both the Axim and Dixcove fish landing sites.