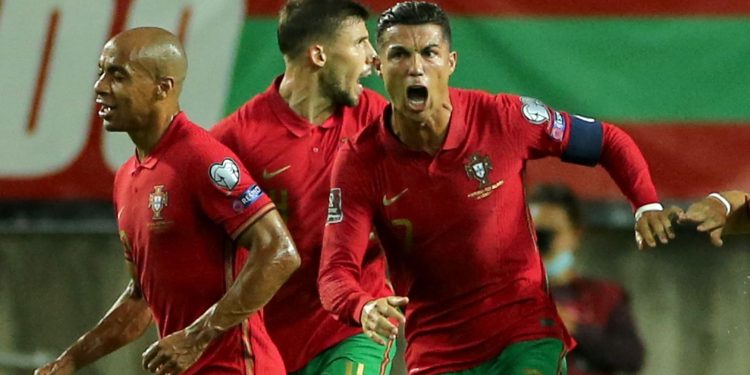 Cristiano Ronaldo broke the men’s all-time international scoring record as his late goals secured a dramatic 2-1 win for Portugal in their World Cup Qualifier against the Republic of Ireland.

Heading into the 89th minute, Stephen Kenny and his side were on the cusp of a famous victory at the Estadio Algarve and their first points of the campaign.

They were two almost identical goals too, with Goncalo Guedes firing in the first cross which was nodded home by the Portugal captain (89) to break Ali Daei’s record. Then, with the last kick of the game, Joao Mario sent in a similar ball, which Ronaldo (90+6) again headed past Gavin Bazunu to take his tally to 111 international goals.

However, the new Manchester United signing did not begin the game well. It appeared to be an unlikely match-up when Ronaldo lined up a penalty in front of the Republic of Ireland’s 19-year-old goalkeeper early on, but Bazunu make an incredible save to deny the forward.

It took well over four minutes for VAR to decide whether the penalty would be taken too after Jeff Hendrick’s clumsy challenge on Bruno Fernandes, but it was deemed the Ireland midfielder did not touch enough of the ball before the man.

The Republic of Ireland matched up to their opponents well in the first half and deservedly went ahead on the stroke of half-time as Egan glanced a header home. However, Portugal dominated the second half and sucker-punched the Irish late on to extend their lead at the top of Group A by three points over second-place Serbia.

Stephen Kenny still awaits his first competitive victory as Republic of Ireland manager, with his side joint bottom on zero points with Azerbaijan, who they face on Saturday.

After a rather tame opening, the game exploded into life in the 10th minute. The Republic of Ireland were caught playing out from the back, with Fernandes latching onto Bazunu’s pass. Hendrick then came in from behind with a clumsy challenge sending Fernandes to ground.

The referee pointed to the spot, but there was a lengthy VAR check of over four minutes to determine if Hendrick touched any of the ball first before the man. The referee spent a few minutes himself at the pitchside monitor before letting the penalty stand.

It was an incredible moment too as Ronaldo stood on the cusp of breaking the all-time goalscoring record for international men’s football, but a sensational save from 19-year-old Bazunu – signed for Man City and currently on loan at Portsmouth – saw him denied. There was another VAR review afterwards too, checking if Bazunu was on his line, but that was over far more quickly.

Although heading into the game as underdogs, the Republic of Ireland could have taken the lead with a few chances of their own just before the half an hour. Shane Duffy and Egan could not turn home Jamie McGrath’s corner, before Aaron Connolly sent an effort over the crossbar.

Portugal’s best chance of the half came soon after as Bazunu was again the hero for Ireland. Joao Cancelo floated a wonderful cross into the area, aiming for Diogo Jota at the back post. He nodded goalwards, but at point-blank range, the teenage goalkeeper made an incredible save to push the ball away.

The Republic of Ireland continued to expose a less than convincing Portugal defence, with Connolly almost firing the hosts ahead with a great run in behind, but Rui Patricio and Joao Palhinha were there to block. From the resulting corner, Ireland did take the lead just before the break. McGrath again delivered the corner and Egan glanced a header into the far corner for his first international goal.

The Republic of Ireland had two penalty shouts early in the second half – both involving Connolly. The first saw the forward go over after contact from Cancelo, and the second was a barge from Palhinha. Both claims went unanswered.

Portugal continued to put pressure on the Ireland defence as they looked for a way through, but were guilty of some poor finishing. Fernandes curled an effort wide of the upright, before Bernardo Silva blazed an effort over the bar from close range.

However, there were two moments of magic to come from Ronaldo. Almost immediately after his free-kick was saved by another wonderful Bazunu save, Guedes drifted in a cross from the left, allowing the forward to rise up and nod home for his record-breaking 110th international goal.

With five minutes of added time to play, Portugal continued to press and snatched the victory with the final kick of the game. Mario delivered the cross this time, and in a copy of the equaliser, Ronaldo powered a header into the back of the net for the winning goal, sending the Estadio Algarve fans delirious on a historic evening.

However, it was a cruel blow for Ireland, who had performed so well for much of the game, but could not keep out the might of Ronaldo.

Man of the match – Cristiano Ronaldo

It’s hard to deny a man who has just made incredible history in men’s international football. He was the ultimate poacher for both goals, lurking in the box to head home, and showed once again why he is one of the best the game has ever seen.

He said: “I’m so happy, not only because I beat the record, but for the special moments that we had. Two goals at the end of the game, it was so tough but I have to appreciate what the team did. We believed until the end, the supporters too. I’m so glad.

“It [the penalty save] is part of the game, it’s part of the business. Sometimes you score, sometimes there’s a mistake but I still believe until the end of the game. I’m so happy to score and win the game.”

The late defeat leaves Stephen Kenny without a competitive win since his arrival as manager, and the Republic of Ireland remain without a point in World Cup Qualifying.

However, there were positives to take from the game, with Kenny telling Sky Sports: “We’re hugely disappointed, the players have been exceptional tonight overall.

“The first half went how we would have wanted, we were able to counter-attack with Aaron Connolly and Adam Idah’s pace and we controlled passages of the game. We restricted Portugal’s chances and scored. We had a few chances to go 2-0 up.

“Portugal were very good in the second half. It was tough for us, we had to dig in and we defended heroically. You just can’t believe that we’ve lost, we should have won it. We were two minutes away, but these are things you sometimes have to accept.

“When you have to win away like that, you do need to win against the odds, but the players were magnificent. Their efforts were really something to be proud of. Technically they were brave on the ball and they put their bodies on the line – they really gave everything. To lose is so difficult for them at the moment.

“There are so many positives in both away games against Serbia and Portugal. There’s so many teenagers coming in and doing brilliantly and they’ve got great role models with the experienced players that they have at the back – Shane Duffy, Seamus Cole, John Egan are great leaders. They’re lucky to have players like that and they can pass on the experience to the players coming through. Hopefully we can continue to improve.

“We have to dust ourselves down and get ready for Saturday.”

Egan: Scoring one of my proudest moments

One of the aforementioned positives was a first international goal for John Egan, who nodded the Republic of Ireland ahead at the end of the first half.

“It’s a really proud moment, in front of my family as well,” he told Sky Sports. “It’s a country I came to a lot as a kid and to score my first international goal here is one of the proudest moments of my life.”

On the result, he added: “It’s really tough to take. To come to a country like this against a world-class team and put in a performance like that, sometimes you don’t get what you deserve. There is loads to be positive about, but gutting not to get a result having come so close.

“We’ve got a game on Saturday so it’s a quick turnaround and we have to put this to bed. We’ve left ourselves with a mountain to climb in the group but we can only look to the next game. We’ve got to try and build on that performance, keep improving.

“Results like this are hard to take, we’ll probably wallow in it a bit tonight, but tomorrow we’re going to have to go again.”