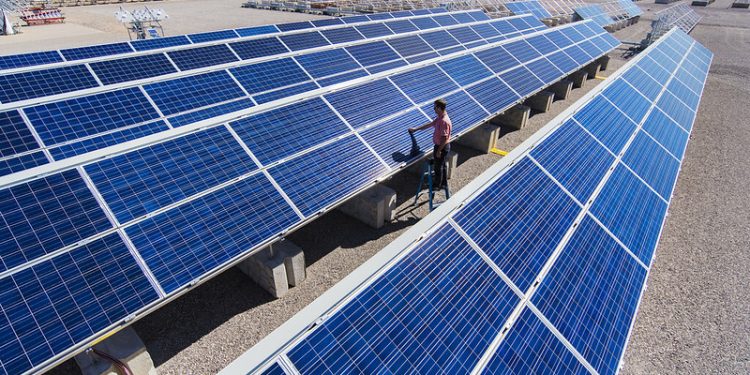 In 2019, the top five solar parks had a combined capacity of 6.6 GWAC. Fast forward to 2021, and today’s top five total over 12.5 GWAC.The intervening Covid-19 pandemic has clearly done little to slow the explosive global growth of utility-scale solar.

In three blogs in the coming weeks, the top solar power plants, solar parks, and solar clusters will be identified. First, however, here’s a reminder of where the records stood in 2019; and how solar parks, individual plants, and regional clusters are distinguished.

In most cases, solar power plants are designed and built singly, with the project developer choosing a site with a suitable connection to the electricity grid. Project size may be dictated by the site area available, connection capacity, or financial restrictions. Where those factors do not impose limits, developers aim for economies of scale often by maximizing plant size.

In 2008, the largest PV project – at about 50 MWAC – was near Olmedilla de Alarcón in Spain. By 2012, the Agua Caliente solar farm in Arizona had taken the record to over 250 MWAC. When the previous list of top plants was published two years ago, the Sweihan project was about to be commissioned in Abu Dhabi with a capacity of 938 MWAC (or 1,177 MWP).

Not all solar projects are developed individually, however. There can be benefits in grouping plants together to take advantage of prime locations and strong grid connections.

By the second decade of the millennium, several national and state-level energy agencies had realized that solar power could be produced even more economically if multiple projects were co-located in one area, where they could share grid connection and other site related costs.

Probably the most notable early example is the Charanka Solar Park in the Patan district of India. When this was first opened in 2012 by Gujarat’s then chief minister, Narendra Modi, it had a combined capacity of 224 MW from 19 individual solar power plants, of which the largest were 25 MW each. It has since been expanded to over 600 MW of overall capacity. Agencies of the state of Gujarat arranged the grid connection and leased land to the project developers.

A similar approach was adopted in China most notably in the Qinghai, Gansu, Ningxia, and Xinjiang provinces. This approach lends itself particularly to centralized economies where state agencies can arrange grid connections, land allocation, and other shared services. This model is also now being adopted in several countries in the Middle East and North Africa, with a few instances in Europe and America.

The Golmud Solar Park in China’s Qinghai province was the largest at 1,800 MWAC, when the previous list was published. Many of these solar parks have been progressively expanded over the years, with several now achieving combined capacities running into the multi-gigawatt range.

The co-located solar park model has not been widely adopted in Europe and America where energy markets are more deregulated. However, less formal co-location of multiple projects can sometimes be found in areas where suitable land and grid connection capacity is plentiful and solar radiation is good.

The Antelope Valley in Los Angeles County hosted the largest cluster in 2019, with a total of about 3,000 MWAC.

The largest power stations of each type

For consistency, the terminology solar plant will be used for an individual project that has been developed by a single developer or consortium, even if it is spread over several geographical plots or built in various phases. Where multiple plants are co-located in a discreet area under the coordination of an identified agency, this will be called a solar park. A cluster denotes several solar farms are co-located in an area without formal coordination.

Single plants are often colloquially known as solar farms. Readers should note that this terminology is not universally adopted, and that some developers and owners choose to call individual plants a ‘solar park’.

Also for consistency, all capacities are quoted in MWAC to allow direct comparison between PV and CSP plants (and other forms of generation). Readers will be aware that the DC peak capacity of PV plants is typically around 25% higher than the rated AC capacity, quoted here.

The next blog will identify the largest individual solar plants in the world, to be followed subsequently by solar parks and then clusters.