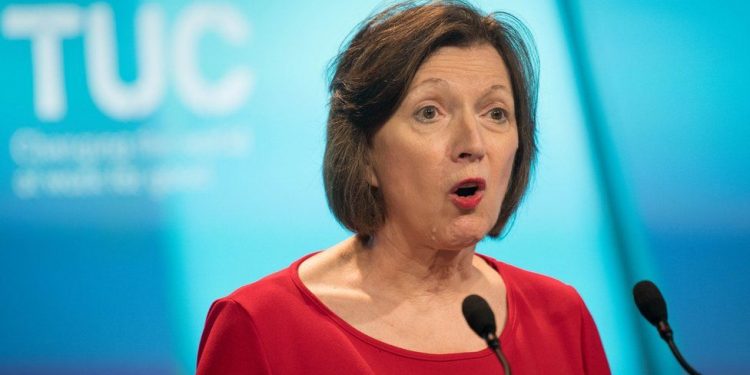 The UK needs to be better prepared for future economic shocks, says the TUC.

“Covid is not going to be a one-off,” the union federation’s general secretary, Frances O’Grady, will tell its annual congress later on Monday.

“Climate chaos is here already and the longer we put off getting to net zero, the more disruptive it will be,” she will add.

At the same time, the CBI is urging the government to avoid further big post-pandemic tax increases on business.

CBI director general Tony Danker will say in a speech later on Monday that ministers must make “big choices” to help business investment.

Instead, there is a risk the government will use business taxes to “carry the load” following last week’s announcement of new levies to fund social care, he will say.

Such a policy is not without consequences for growth, he will add.

Speaking to the TUC Congress in London, Ms O’Grady will highlight the danger to workers from further pandemics, climate change and technological disruption.

“Years of austerity took their toll and meant we fought this pandemic with one hand tied behind our backs,” she is due to say.

“The UK must be better prepared for crises in the future. New tech offers new opportunities but also poses old threats to jobs.”

She will say that ministers may wonder what they can do to help fill job vacancies.

Ms O’Grady is also due to challenge Prime Minister Boris Johnson on his policy of “levelling up”.

“If levelling up means anything, it must mean levelling up at work and levelling up living standards,” she will say, arguing Covid pandemic “must be a catalyst for real change”.

Speaking to BBC Radio 4’s Today programme ahead of her speech, Ms O’Grady urged the government to reconsider recent rises to National Insurance contributions, describing the move as “another hit” to young people and low-paid workers.

“We saw far too much inequality before the crisis, it’s got a lot worse. We know that working people have been subject to pay freezes and pay pauses for years.”

She argued that shifting tax to wealth instead may offer a boost in demand for the economy.

“One thing you can guarantee about working people is that they spend their money locally and that’s what will get the economy moving again.”

For the CBI, Mr Danker is set to warn that a return to “business as usual” in economic policy would be a mistake, with the UK lagging behind some of its international competitors in driving investment in the industries of the future.

He will say: “The lack of detail and pace from the government on some of the big economic choices we must make as a country are the biggest concerns for business.”

He will call for a series of measures including:

“Investing by the UK: that must be our mantra now, so that the decade ahead does not repeat the low growth, zero productivity of the decade past, and government holds the key to unlocking it all,” Mr Danker will say.

A Treasury spokesperson said the government had shown it was committed to supporting business investment, extending the Annual Investment Allowance increase for another year and introducing the super-deduction, which it called “the biggest two-year business tax cut in modern British history”.

“The impact of the pandemic means we have had to make the tough but responsible decision to raise taxes. We’ve asked both individuals and businesses to pay a bit more as we get our public finances back on a sustainable path,” the spokesperson added.