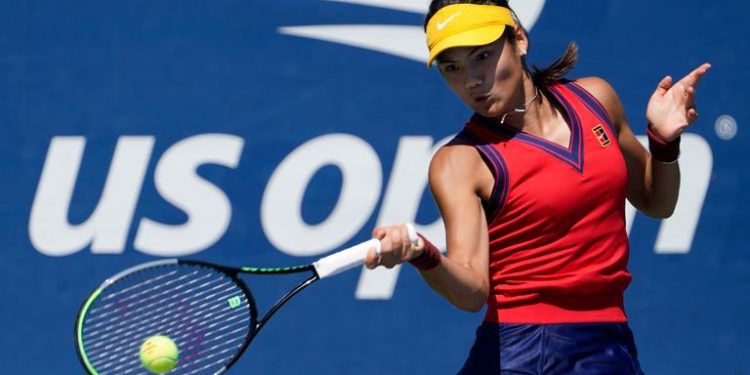 In the early hours of Friday morning, British teenager Emma Raducanu will take to court against the world No 18 Maria Sakkari with a place in history beckoning

Raducanu, who came through three qualifying matches in order to reach the main draw, is yet to drop a set at Flushing Meadows on her way to the last four.

She has seamlessly moved from the outside courts to the US Open’s greatest stage – the Arthur Ashe Stadium – and her quarter-final victory over the recent Tokyo Olympic Games gold medallist and 11th seed, Belinda Bencic, stunned experts and fans alike.

Those following Raducanu’s progress cannot fail to be bowled over by her talent and ability to handle the greatest matches of her life with such poise.

World ranking numbers seem immaterial right now, and Raducanu’s confident march through the draw is something players 10 years her senior still aspire to do.

She hasn’t once looked fazed by the major’s main show court, there are no signs of these moments becoming too great for her, and instead the 18-year-old is dealing with both triumph and adversity like a seasoned professional.

Raducanu’s opponent Sakkari played her first events on the ITF Circuit back in 2010 and now, working under British coach Tom Hill, she is enjoying one of the most productive periods of her career.

“When it comes to tactics and strategies, that is something that I obsess about,” Hill said during the French Open.

“I woke up at 2am the other night panicking about where Maria should stand on the return position against Kenin, so I’m watching videos at 3am trying to figure it out!”

Footage of Raducanu will be there for Hill to use, but it will be in shorter supply than he had for Bianca Andreescu or Karolina Pliskova – Sakkari’s fourth-round and quarter-final opponents – due to Raducanu’s recent arrival on the tour.

On top of that, throughout this major, Raducanu has been discovering new elements to her own game; ones that she didn’t even know existed. In short, Hill must be on his tactical A-game ahead of this semi-final.

Maria Sakkari – Route to the US Open semi-final

Together, Hill and Sakkari have also focused on using Sakkari’s “own weapons” to find ways to beat opponents. Sakkari has worked hard on her serve to ensure it’s both powerful and accurate, and her athleticism means that she covers every inch of the court.

“I’m getting where I want to be, getting closer to achieving my goals, making myself believe that I belong here,” she said after her 6-4 6-4 quarter-final win over the world No 4 Karolina Pliskova.

The victory was Sakkari’s third straight win over a top-10 seed and she lost just two points on her first serve during the entire match.

Needless to say, Sakkari’s fitness, power and game nous will be a lot for Raducanu to handle, however like the British teenager, the 26-year-old will be playing in her first US Open semi-final.

“I wouldn’t call myself the favourite,” she said. “I think we all have equal chances of winning the semi-finals and then winning the title.”

Since the opening day of qualifying, Raducanu has been playing lights out tennis in New York. She’s wholeheartedly embracing the Grand Slam stage and is making history on a daily basis.

The 18-year-old is the first qualifier to reach the last four in the Open Era and only the third woman ranked outside of the top 100 to reach a US Open semi-final.

On Monday, her ranking will improve; she will become the new women’s British No 1 and overtake Johanna Konta, who has held that position since October 2015.

Yet, for Raducanu, making history is a happy by-product of playing the type of tennis that she wants to play.

“I’m not here to chase any records right now,” Raducanu said. “I’m just taking care of what I can do on the moment and on the match ahead.”

The fact that Raducanu does not have a day off between her quarter-final and semi-final is likely to be a positive.

Although it shortens her recovery time, it also diminishes the amount of time she has to focus on the magnitude of the match coming up.

Instead, Raducanu can remain in her own bubble – on ‘auto-pilot mode’ as she describes it – and it’s a mode that has worked extremely well for her so far in New York.

Alongside the weight of her groundstrokes, her serve and ability to attack opponents on the return of serve, Raducanu’s mental resilience has been pivotal throughout her run.

In both her fourth-round match against Shelby Rogers and quarter-final versus Belinda Bencic, Raducanu felt the nerves and yet, had the strength to overturn early deficits in the opening sets.

“I think that the calmness and the mental strength [I have] definitely comes from my upbringing,” she noted. “I think my parents have both instilled in me from a very young age to definitely have a positive attitude on court.”

The momentum that Raducanu has developed since her opening match of qualifying is considerable, however Sakkari does have the weapons to make life difficult for her.

Sakkari is unrelenting and powerful, and yet her lack of experience at this stage of the US Open means there is a question mark next to her name too.

With this semi-final, both women are entering uncharted territory and the knowledge that they are just one win away from a first major final must fuel them and not overwhelm them.