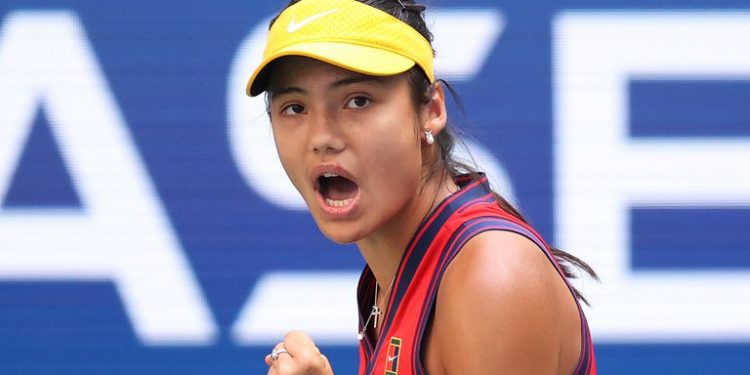 British qualifier Emma Raducanu made it a US Open debut to remember after she reached the quarter-finals with another sensational win, this time over Shelby Rogers in front of a partisan home crowd on Labor Day.

The 18-year-old showed that she was the real deal against American Rogers, the conqueror of top-seeded Ashleigh Barty, dismantling her 6-2 6-1 to become the youngest British player to reach the last-eight in New York in the Open era.

“It feels absolutely amazing,” Raducanu said in her on-court interview. “Shelby is a great opponent, she’s done so well in the US Open and she’s had a great week so I knew it was going to be a tough match but I’m so happy to have come through and have managed to overcome some of the nerves at the beginning.”

Addressing the last British woman to win the US Open, Virginia Wade, who was watching courtside, Raducanu said: “Thank you so much for watching my match. I really appreciate it.

“You’re an absolute legend so I’m really honoured to have had you here. I’m just going to try to do my best each round and let’s see how far it goes.”

The Kent teenager, who matched her Wimbledon heroics of two months ago in reaching the fourth round after dropping just a single game in a comprehensive weekend victory over Sara Sorribes Tormo, walked out looking to go one better on Arthur Ashe Stadium.

Raducanu has taken everything remarkably in her stride since her Wimbledon retirement with breathing problems, but she took a little while to get used to the surroundings, dropping her opening service game before Rogers consolidated her break.

That seemed to be a catalyst for Raducanu to start playing her game and it wasn’t long before she settled into the contest.

The world No 150 went on a run of six games in a row to win her 13th consecutive set at Flushing Meadows.

Rogers, 10 years Raducanu’s senior, has battled back from knee surgery and reached the quarter-finals last year, but the errors were coming thick and fast from her racket.

However, Raducanu completed another famous victory on her fourth match point to make it through to her maiden Grand Slam quarter-final against Belinda Bencic.

Raducanu became the first woman since Jennifer Capriati in 1990 to reach at least the fourth round of her first two Grand Slam tournaments and she is only the third qualifier to reach the quarter-finals in New York.

After failing to serve out the opening set, she came out on top of a 26-point tie-break, saving four set-points to maintain her record of not having dropped a set all tournament with a 7-6 (14-12) 6-3 victory.

“I feel like I’m tested every match,” the Swiss 11th seed said. “Definitely today it was more challenging for me.”

Flushing Meadows has been Bencic’s most successful Grand Slam venue and this is the third time she has reached the last eight, with her best result a semi-final run two years ago.

Swiatek is the only woman to reach at least the fourth round at each Slam this year but the French Open is the only tournament where she has gone further.