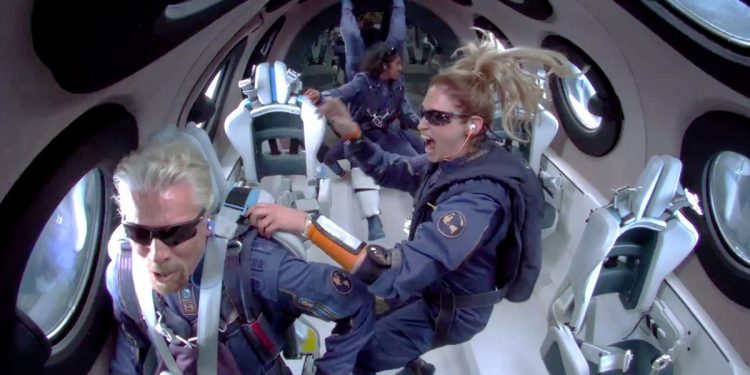 Billionaire Richard Branson makes a statement as crew members Beth Moses and Sirisha Bandla float in zero gravity on board Virgin Galactic's passenger rocket plane VSS Unity after reaching the edge of space above Spaceport America near Truth or Consequences, New Mexico, U.S. July 11, 2021 in a still image from video. Virgin Galactic/Handout via REUTERS. NO RESALES. NO ARCHIVES. THIS IMAGE HAS BEEN SUPPLIED BY A THIRD PARTY.

Virgin Galactic has reopened ticket sales for its space flights at a starting price of $450,000 a seat.

It comes after the company, led by billionaire Richard Branson, completed its first fully crewed flight to the edge of space in July.

“Leveraging the surge in consumer interest following the Unity 22 flight, we are excited to announce the reopening of sales effective today,” he said.

“As we endeavour to bring the wonder of space to a broad global population, we are delighted to open the door to an entirely new industry and consumer experience.”

Must Read: US push for green energy could strand $68 billion in coal, gas assets – Report

Days after the Virgin mission in July, Mr Bezos took part in the first fully crewed test flight of one his own planes into space.

Under a partnership with Nasa it plans to transport astronauts to the ISS in future. It also plans to send three tourists on a 10-day trip later this year.

For its flights, Virgin said it prospective tourists would have the option to buy single seats, friends and family packages, or reserve the whole plane.

Those who have already expressed an interest in the flights will get to reserve their seats first. About 600 tickets had been sold before it previously halted sales.

The firm’s next spaceflight, Unity 23, is expected to take off in late September from Spaceport America in New Mexico.