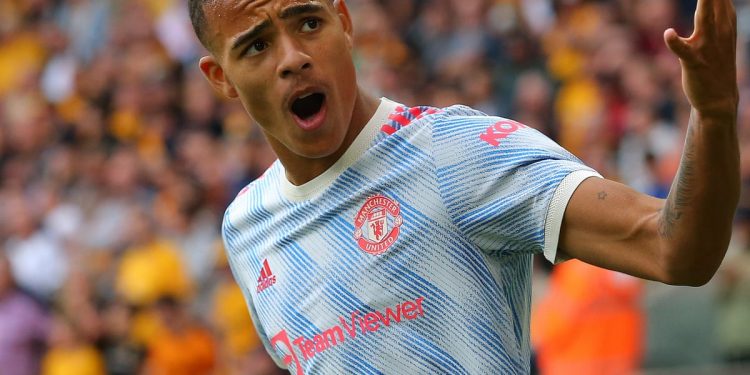 The build-up to Greenwood’s goal was not without controversy as Paul Pogba appeared to catch Ruben Neves only for Mike Dean to ignore the appeals of the midfielder.

United, who included Raphael Varane and Jadon Sancho in the starting line-up for the first time, also had De Gea to thank for the victory after his extraordinary efforts to twice keep out Romain Saiss.

Wolves will rue their finishing as they remain without a point under new boss Bruno Lage but Ole Gunnar Solskjaer‘s side now find themselves third – with Cristiano Ronaldo on the way.

How the game unfolded at Molineux

Wolves started the game with real intensity, Adama Traore causing plenty of problems for the Manchester United defence with his trademark direct running.

Firstly, he skipped beyond Pogba and Fred in midfield and calmly set up Raul Jimenez in the right channel but the striker’s tame shot was saved by the feet of David de Gea.

Then, it was Ruben Neves’ turn to break on United, putting young Francisco Trincao clear only for his shot to be blocked brilliantly near the line by Aaron Wan-Bissaka.

When Joao Moutinho volleyed over from a good position, Molineux was rocking, and though Conor Coady had a headed attempt, the breakthrough goal would not come.

Varane was to the fore as United repelled a series of corners and before the first half was over the opportunities began to come at the other end of the pitch as gaps appeared.

Pogba lofted a pass through to Bruno Fernandes that he expertly finished beyond Josa Sa only to see the assistant referee’s flag rightly go up for offside.

As supporters traded insults amid a boisterous atmosphere, a neat touch by Sancho presented a chance for Mason Greenwood in the left channel but his fierce shot flashed just wide.

The Wolves supporters applauded their team off the pitch but must have been fearing this was more of the same having played well without scoring in their previous two games.

Wolves named an unchanged team from the defeat to Tottenham despite some impressive performances in the midweek cup victory over Nottingham Forest.

More interesting was the Manchester United line-up as Raphael Varane came in for his full debut while Jadon Sancho made his first Premier League start.

The home side continued to carry the game to their opponents nevertheless with more experiencing defending from Varane required to keep out Trincao.

Fred forced a save from Sa with a wickedly struck volley but Solskjaer’s side still struggled for fluency even after Edinson Cavani replaced James with Greenwood moving out wide.

Neither side were settling for the point and Trincao spurned a good opportunity when set up by Traore only to scuff his kick, but Wolves’ best chance was still to come.

Romain Saiss connected well with Moutinho’s corner from close range only for De Gea to produce an instinctive save. The ball came back out to Saiss but this time De Gea had an extraordinary response – clawing the ball out away to his left.

Nobody at Molineux could quite believe what they had witnessed from the goalkeeper and the miss proved costly soon after when Greenwood finally found the breakthrough goal.

Wolves were unhappy with a decision in the build-up as Neves and Pogba contested the ball. The Manchester United man seemed to catch his opponent only for play to go on.

Greenwood took full advantage, ramming home with his right foot from a narrow-angle, and while Neves protested vociferously, displaying the mark from the clash, the goal stood.

That seemed to affect Wolves badly and they were unable to build up any momentum in the closing stages. With Ronaldo’s arrival imminent, United’s moment might just be starting.

“If someone told me that the best way is to defend and put 10 men behind the ball every time and we would win games, for sure I would go with that idea. But I think this idea is better. The way we play, the way we create chances, I am sure the goals will come.”

Ole Gunnar Solskjaer: “In the Premier League, they can go both ways. Today, of course, we get three points, get a clean sheet. On another day, they might score when Aaron clears one off the line or when David saves that double chance in the second half. That can go against us, of course.

“But that is also good play. It is allowed to have good players in either box. With Mason, he is a special kid, unique at hitting the target quickly, right foot, left foot, it does not matter for him.

“We have played better, definitely. But sometimes you have got to earn your luck and I thought we did.”